Dublin bus upgrade plan: What you need to know 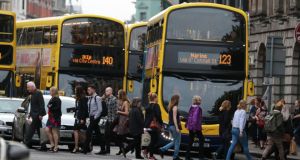 The plan involves upgrading 16 core bus routes into the city, from Swords in the north to Lucan in the west and Bray in the south. The authority says its help for residents on affected roads will include paying for the landscaping of new gardens and trying to find alternative parking for them.

As Malahide Road narrows between Fairview and Griffith Avenue, the scheme proposes to reroute cyclists via Brian Road and Charleton Road.

Bus lanes are proposed in both directions on Swords Road in Santry, from Shanrath Road to Omni Park shopping centre. This would make the street one-way for general traffic, with inbound vehicles routed via Coolock Lane and Santry Bypass. A new slip road would be incorporated to link the southbound Santry Bypass to Shantalla Road.

Narrow roads and the turning system at Hart’s Corner make it difficult to provide continuous bus and cycle lanes.

General through traffic would be removed from Old Cabra Road and Prussia Street in order to provide bus lanes. Local access would be maintained, including to the shopping centre.

The provision of continuous bus lanes through the M50 junction may affect overall traffic capacity at this interchange.

Mount Brown and Old Kilmainham Road are too narrow for both bus lanes and general traffic lanes. Mount Brown would therefore be restricted to public transport, cyclists and local access. Through traffic would have to be diverted via the Liffey quays or South Circular Road.

Bus lanes could be accommodated at the M50 underpass by routing cyclists on to the Grand Canal greenway.

New link roads would be built to divert all traffic via Calmount Avenue and Calmount Road while maintaining access to the old section of Greenhills Road.

Templeogue Road would become one-way outbound for general traffic while permitting taxis, buses and bicycles to travel in both directions. Inbound general traffic would divert via Cypress Grove Road or via Springfield Road to Rathfarnham Road.

The pavements on Rathmines Road would have to be narrowed to make room for one bus lane and one traffic lane in each direction. An alternative would be to divert outbound traffic via Ranelagh and make Rathmines Road one-way for general traffic, in addition to providing two bus lanes.

Shankill village has very limited road space, making bus and cycle provision very challenging. Cyclists could be diverted around the village via a series of quiet routes and new cycling lanes to the east.

A number of significant junction reconfigurations would be required, together with some traffic restrictions.

Challenges include Rock Road’s proximity to Booterstown Marsh, an environmentally sensitive area, and the layout of the Merrion Gates junction, which includes a level crossing.

Will require the introduction of a contraflow bus lane on City Quay. Restricted width at the Scherzer lifting bridges, which are protected structures. A new bridge is required over the River Dodder at the east end of Sir John Rogerson’s Quay.

The report also says a new ticketing system will allow passengers to pay their fares more easily, using credit cards and mobile phones; a cashless payment system will also speed up boarding times. Fare structures will be simplified and allow for easier movement between different transport services without the current financial penalty.