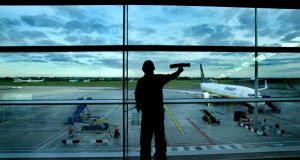 Homeowners living close to a planned second runway at Dublin Airport are to be offered 20% above the market price for their homes in a voluntary purchase scheme. File photograph: Kate Geraghty/The Irish Times

Homeowners living close to a planned second runway at Dublin Airport are to be offered 20 per cent above the market price for their homes in a voluntary purchase scheme.

The offer will be extended to 38 households, who will have about six years in which to decide whether to sell. Their homes will not be subject to a compulsory purchase order .

Planning permission for the north runway was granted in 2007 but was postponed two years later due to economic conditions.

However, with passenger numbers at record levels last year, it has been revived.

Properties located within a “noise contour” area around the airport, where volumes reach 69 decibels or higher, qualify for the voluntary purchase scheme.

This contour area has shrunk in the last 10 years as airline technology has reduced noise levels.

While this means the number of properties qualifying for the scheme could be significantly reduced from those originally identified in 2007, it is understood Dublin Airport Authority (DAA) has decided to honour its initial offer to cover all properties initially contacted.

Valuations on homes entered into the scheme will be carried out by the authority, although it will pay for owners to obtain their own separate quotes if they wish.

In the event of a difference in quotes of 5 per cent or less, the authority will make a renewed offer for the property half way between the two figures.

There is no cap on the buy-out offers, which are likely to cost the authority millions of euro.

Options on what to do with the properties it acquires, which do not need to be demolished for the runway project, are likely to be considered later.

The houses in question are of varying descriptions across a rural part of north Co Dublin.

A spokesman for DAA declined to comment on details of the scheme.

The second runway is expected to be operational by 2020 and property owners have until three years after the first flight takes off to decide whether or not to sell.

In the meantime, they can still take advantage a sound insulation scheme, which is also to be funded by DAA as part of the planning requirements, regardless of whether they eventually decide to sell.