Drowning prevention project could save 2,500 lives a year 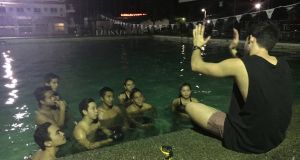 Situated in the tropics of the Pacific, the Philippines have some of the best beaches in the world. However, the country also ranks highly in the number of people – especially children – who die due to drowning. A recent study by the World Health Organization (WHO) showed that nearly 2,500 people drowned each year in the Philippines between 1980 and 2011.

Float Philippines is a recent initiative by a group of Australian students from Griffith University. In 2015 they sought to find a drowning prevention programme to be rolled out across the Philippines.

“Drowning prevention programmes are commonplace in Australia and we grow up feeling safe when we are at the beach, both as a result of our swimming culture and the incredible job our surf lifesavers do patrolling the beach,” says Andrew McLean, directing manager of Float Philippines.

The organisation wants to run “learn to swim” and “surf lifesaving” programmes to decrease cases of drowning, particularly in tourist spots along the coast. Nearly two years after their initial idea, Float’s local co-ordinator, Kina Santillan Pascua, says they are nearing the implementation phase of the project.

Pascua, a former co-ordinator for the Australian embassy, says she sees the importance of implementing a drowning prevention programme in the Philippines.

“I work in a lot of development projects and everywhere I go, I see a lot of communities with kids playing near shorelines. It’s their backyard and we have to implement programmes that will make their environment safer,” she says.

While the long-term objective is to promote a culture of safer aquatic spaces in the entire Philippines, the team behind the projects understands that it has to limit its programme to make it sustainable and scalable.

Float’s pilot project will be based in Baler, but the team hopes that in the long term, it will be able to provide surf lifesaving training across Aurora Province.

“We hope to ensure sustainability through training and developing skills of the local organisations we are working with. In addition to this, we want to provide local and international partnerships to these organisations running the project from the ground level to boost their knowledge and capabilities in the drowning-prevention field,” says McLean.

For these Australian students, distance – and the difference in culture – is not going to be a hindrance to ensuring that Filipino children are safe in the water.

As McLean puts it: “We think that everyone should have the ability to learn to swim and enjoy an aquatic environment.”