Driving the bus is easy, but how do I turn on Radio Nova?

With Dublin Bus looking to increase its percentage of women drivers, Irish Times journalist Niamh Towey looked at if the life of a Dublin Bus driver was for her. Video: Enda O'Dowd 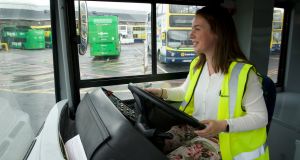 My Grandad Charlie taught me how to drive before I made my Confirmation.

We spun around the farmyard in Derrinacartha, Co Roscommon, in his Toyota Starlet once a week, never making it past second gear.

One of my abiding memories is him telling me, repeatedly, not to cross my arms while turning the wheel - he also used to say “lock hard” a lot too, though I’ve never really figured out what that meant.

I was thinking of him yesterday when I took my first spin in a Dublin Bus as part of a recruitment campaign to get more women drivers behind their wheels.

Declan Graham has been training drivers here for almost 30 years, and assures me women are wired to be better at it.

“It’s the testosterone, they’re more speedy,” he says about the men. Declan and I would work well together, I could tell.

After a couple of spins around the Broadstone depot in Phibsboro, I realised there are really only two key differences between driving this bus and driving my car: A) My car is not automatic and B) The bus is a good bit bigger.

The rest is a breeze.

In fact, it was so easy that I was left a little bit disappointed. I had hoped for an obstacle course of weaving cyclists and meandering millennials on smart-phones.

I was really looking forward to radioing the head office informing them of a too-long Luas blocking my path. Ha! Silly Luas guys.

There were a number of props missing from this demonstration too, which made for a rather frustrating user experience.

How do I turn on Radio Nova? Why isn’t there a copy of The Daily Star on the dashboard?

Declan never said thanks and stuck up the thumb when he got off the bus. Nobody fell down the stairs when I braked too hard at the imaginary old lady crossing the road.

No wonder Dublin Bus is struggling to recruit women - attention to detail is key for us.

All jokes aside, driving a bus around a tarmacadamed yard really is very similar to driving a car, only the steering wheel is bigger and the risk level higher. Throw in the aforementioned props and I’d imagine that’s where things get a little more complicated.

If you’d like to watch my driving masterclass, we have a video on irishtimes.com - which unfortunately includes footage of me crossing my arms while driving. Sorry Grandad Charlie.