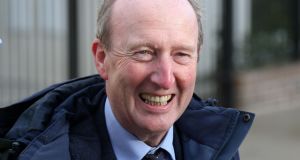 Minister for Transport Shane Ross: “Speeding is a killer, drink-driving is a killer. They both kill in almost equal amounts.” Photograph: Colin Keegan, Collins Dublin.

Drivers will be hit with automatic penalty points and an €80 fine if they are pulled over and do not have their driving licence to hand, under proposals being tabled by Minister for Transport Shane Ross.

The changes would remove discretion from gardaí to allow motorists present at a station with their licence if they are without it when stopped. The new moves from Mr Ross are being brought to Cabinet today.

At present, if a motorist is stopped by a member of An Garda Síochána, an individual Garda has the discretion to ask the person concerned to present at a station with their licence by a set period of time.

If these proposals pass into law, this discretion would be removed.

Sources said the proposal is an effect of the introduction of the Clancy Amendment, which seeks to hold car owners who give their vehicle to an unaccompanied learner driver accountable in law.

Mr Ross’s proposals are expected to include graduated fines for speeding. In the past, he has said he wants to tackle speeding in the same manner he has tackled drink driving.