Fewer than half of 70,000 people living in Ireland with a UK licence have exchanged 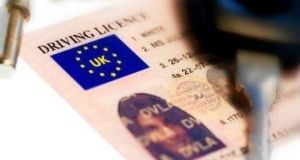 Fewer than half of the 70,000 people living in Ireland who hold UK driving licences have exchanged them for an Irish licence ahead of the October 31st Brexit deadline, the Dáil has heard. Photograph: Getty

Opening hours at National Driver Licence Service offices will be extended from Monday until October 31st to accommodate drivers who need to exchange their UK licence for an Irish one.

While the opening times differ depending on the centre, many are opening at 8am until 7pm.

A full list of the opening times is available here.

The Dáil heard recently that fewer than half of the 70,000 people living in Ireland who hold UK driving licences have exchanged them for an Irish licence ahead of the October 31st Brexit deadline.

Minister for Transport Shane Ross said last week it was “rather disturbing” so many people had yet to transfer their licence but he hoped the situation would be remedied in the coming weeks.

The current waiting time to exchange a licence is just three days, he said but only 34,000 motorists had done so.

Fianna Fáil transport spokesman Marc MacSharry said if there was no deal there should be transitional arrangements for a certain length of time to facilitate people.

Mr Ross said the exchange of driver licences would become a “national competency” rather than an EU one.

His department had examined the technical issues and he wanted to put in alternative arrangements for the exchange of licences, including returning emigrants holding a UK licence.

But he said this could not be completed until after the UK has left the EU, which was why he was urging motorists to exchange their licence without delay.