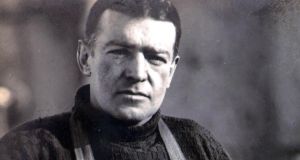 A century ago this month, as Europe was at war and plans were being made for an Irish rebellion, a motley multinational group of adventurers led by Ernest Shackleton was stranded in ice thousands of miles away on the Antarctic. Photograph: Scott Polar Research Institute/University of Cambridge/PA.

A century ago this month, as Europe was at war and plans were being made for an Irish rebellion, a motley multinational group of adventurers was stranded in ice thousands of miles away.

Ernest Shackleton and his 28-strong crew had lost their ship, Endurance, as they attempted to cross the Antarctic continent and were running out of food.

By the end of March, 1916, they would be eating the last of the expedition’s dogs, and by late April, Shackleton, fellow Irishmen Tom Crean and Timothy McCarthy would be forced to set out with three others on a perilous sea journey to seek help - oblivious to the momentous events occurring back at home.

“If a US film company was making it, it would be pure Spielberg,” British ambassador to Ireland Dominick Chilcott said.

Mr Chilcott invited Irish adventurers and members of the Shackleton and Crean families to a reception on Monday night to honour the members of the Imperial Trans-Antarctic Expedition of 1914-1916.

He admitted that he was not aware that Shackleton was Irish until he was appointed to the diplomatic posting here. “Part of the appeal for us is that he is a figure with resonance on both islands,” Mr Chilcott said, noting that “technically” Shackleton was British when he first set out.

“And what’s not to like about this great adventure story – he and his men trapped in Antarctica while the world changed with the awful conflagration of war, and yet nobody on his expedition lost their life.”

Mr Chilcott said that in some ways Shackleton was now regarded in Britain as the greater hero than Robert Falcon Scott, who led two expeditions to the Antarctic and died on the Ross ice shelf in March, 1912.

He also paid tribute to the role played by Crean, a Kerryman, and McCarthy, from Cork, in the expedition, as did polar exploration author Michael Smith.

Representatives of the Athy Heritage Centre which runs the annual Ernest Shackleton autumn school and expedition enthusiast Eugene Furlong of Cork were also on the guest list, along with members of the Defence Forces.

There are no plans to date for an official Irish commemoration of Shackleton’s exploits, but Mr Smith noted that Kildare County Council had commissioned a statue for Athy, near where the adventurer was born.

The sculpture by Mark Richards will be unveiled on August 30th to mark the centenary of Shackleton’s rescue of all 22 of his men from Elephant Island, after they had been stranded for 105 days.

The Athy heritage centre is also fortunate to have received a donation from Norway of the ship’s cabin in which Shackleton died, and it is currently being restored in Connemara. Mr Smith described it as a “world class artefact” which Ireland was lucky to have.