Donegal postman delivers letter to ‘your man with the glasses’

Letter was addressed to ‘Henderson...who’s doing the PhD up there in Queens in Belfast’ 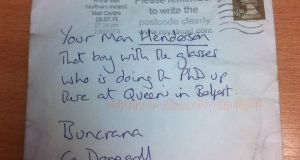 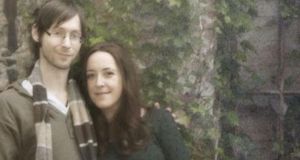 Barry Henderson - “your man with the glasses” - with wife Roisin. Photograph: Facebook.

“Your man Henderson. That boy with the glasses who’s doing the PhD up there in Queens in Belfast.”

Sure ya know him - he lives up there with the wife.

For us, trying to decipher who “your man Henderson” is might seem a fairly big ask, but it proved no bother to this Buncrana postman.

He cunningly delivered it to the Inish Times office where Roisin Henderson, wife of the aforementioned “boy with the glasses”, works as a journalist.

A guy Barry knows sent him this from Belfast, with that wee note included inside it. The postman delivered it to the...

“The postman delivered it to the office when I was out, asking if it could possibly be for my husband. I think it’s brilliant. Only in Donegal, ” she wrote in a Facebook post on Wednesday.

Barry Henderson, to whom the letter was cryptically addressed, is in fact “doing the PhD up in Belfast”in modern history at Queens University.

The couple live in Buncrana, Co Donegal, which is about as far as the writer got in terms of geographical knowledge of the address.

The letter contained a small note saying “If this has arrived, you live in a village.”

It begs the question - why spend €27 million on an EirCode system when we have postmen trained like sniffer dogs?