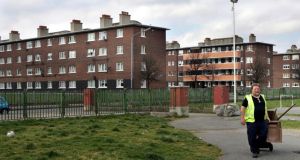 Some €19 million is to be spent to provide 100 new homes in the first phase of regeneration of Dolphin House in Dublin, which is one of the largest local authority flat complexes in the State.

The 1950s estate of more than 400 flats near the Coombe hospital in Dolphin’s Barn, has become increasingly dilapidated over the last 20 years with persistent damp, mould and sewage problems.

The complex was designated for demolition and redevelopment several years ago and Dublin City Council had hoped to pursue the project as a Public Private Partnership, but the economic crash scuppered those plans.

The council has now decided to move away from the traditional “scorched earth” regeneration model, whereby the complete estate is demolished and rebuilt, in favour of a combination of demolition and new building, along with a reconfiguration and refurbishment of flats.

The first phase of the development will see the delivery of 100 “new” homes through this process. Some 72 existing flats will be reconfigured to make 63 larger apartments, and 37 additional houses and apartments will be constructed.

The reconfiguration work will see buildings stripped back to their skeleton, the replacement of all sewage systems and drains, water and electricity services. It will also involve the removal of some internal non-structural walls and the addition of balconies and lifts.

The blocks currently stand in a U-shaped formation. New blocks would be built to enclose the complex and create internal courtyards, which would increase the security of the complex and reduce opportunities for antisocial behaviour.

The orientation of the flats, which face away from the Grand Canal, would also be changed to make better use of the canal as an amenity.

Minister of State for Housing Jan O’Sullivan has indicated support for the scheme. The council hopes to finalise funding with her department in the coming months before going to tender for construction early in the new year, with a projected completion date of September 2016.

‘Ambitious project’
Chairman of the Dolphin Regeneration Board Fergus Finlay praised what he said was an “ambitious project” and the first step towards the physical, economic and social regeneration of the estate.

“It is good to see that the council and the Department of Environment, Community and Local Government are committed to improving the housing conditions of tenants of this estate despite the difficult economic climate that we are all going through,” he said.