Divisions in Green Party over CETA latest complication for Ryan 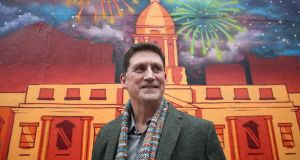 Green Party leader Eamon Ryan has faced questions over his leadership and the direction the party has taken in Government. Photograph: Nick Bradshaw

Eamon Ryan may want to change the world but he has to lead his party, too. And that has not been easy since the Green Party returned to Government, with memories of the last period of office still raw for many.

The divisions appeared again this week when two of his TDs said they would vote against CETA, the EU-Canada trade agreement, and the issue will dominate the party’s policy council this week, too.

Meanwhile, there have been questions over his leadership, the direction the party has taken in Government, and allegations of bullying within the party. There have also been several high-profile departures.

“I would not deny or ignore that for a lot of people this has been a very difficult time,” he responds, “those that have left I wish them well and stay in touch. Any complaints you listen to with rapt attention and address as quickly as you can”.

“Maybe I’m a born optimist, but I believe we have a tremendous opportunity to improve the daily quality of our lives by delivering practical improvements, and radical change by virtue of the influence we have.”

Saying that he is focusing on those future wins, he went on: “I can’t ignore that. I can’t walk away from that responsibility. I can’t not do the things I need to do to address it.

“If there are differences on things like CETA, we have a common cause. I keep on going back to that in terms of listening to people and listen to criticism and treat it all with respect.

“That’s what a lot of people have been complaining about, the lack of respect. We share the common cause of addressing the ecological crisis and in doing that I think we, as Greens, will pull together.”

However, two-thirds of Green Party councillors have called for a national convention on the CETA trade deal, which the Coalition parties avoided mentioning in the programme for government because of the Greens’ concerns.

Four motions on the subject go to the party’s policy council this weekend, including one by the local Government group of councillors, who needed a two-thirds majority to agree on the motion.

The free-trade agreement between Canada and the European Union should have been ratified in the Dáil after just a 55-minute debate on Tuesday, but was postponed until January.

The creation for an investor court system – that would allow firms to sue over regulatory decision that hit their profits unjustifiably – is particularly hated within the Greens.

A special convention, if called, would complicate matters for Ryan, though many in the party are unhappy believing that he, and others in the leadership are trying to close down debate.