Death of Ian Paisley marks the end of an era

Analysis: Late Unionist leader lived up to many different characterisations 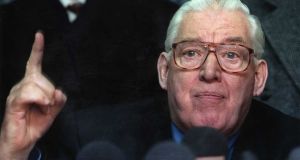 Ian Paisley lived up to the many different characterisations of his personality. Photograph: The Irish Times

The death of Ian Paisley marks the end of an era. Here was a Big Man with big boots.

Descriptions and characterisations vary greatly: the most divisive politician in modern Irish history; the Dr No who became Dr Yes; a demagogue; an egocentric with a lust for power; a preacherman of deep faith; a bigot; a politician who worked as hard for his Catholic as for his Protestant constituents; a man who in the end cemented the peace; a loving family man.

Dr Ian Paisley was all these things and more. You can’t but return to the depiction of Dr Paisley by another prominent public figure Dr Maurice Hayes: “Ian Paisley has six personalities: two of them are very nice people, two quite awful, and the other two could go either way.”

He was enigmatic in so many ways but what was undeniable was that he was a politician with a burning ambition; a man who would not rest until he was top of the heap; a man who as leader of the Democratic Unionist Party, which he founded in 1971, entertained what initially seemed an unachievable almost risible goal: to usurp the Ulster Unionist Party - which he described as Big House unionism - and become the undisputed leader of unionism.

All this he achieved. He would allow no other unionist leader to take the middle-ground. It had to be done by him and on his terms. In the end he ruled the roost as unionist First Minister albeit he had to share that power with his Chuckle Brother Deputy First Minister Martin McGuinness. As part of his self-centred nature it was only when he achieved that power that he could make the necessary compromises.

Getting to that point was where the history - quite a lot of it bad - was made.

Born in Armagh in April 1926 he first began to gain a name in the public eye when on St Patrick’s Day in 1951, after a church dispute, he started his own Free Presbyterian Church, developing the Martyrs Memorial Church on the Ravenhill Road in Belfast. From thereon he would make his indelible mark on church, political and public life.

With Dr Paisley as moderator for almost 57 years the fundamentalist and evangelical church expanded and now has some 15,000 members with congregations on the island of Ireland, Britain and North America. His effective removal as moderator from the church in January 2008, although by way of retirement, was due to his sharing power with Sinn Fein the previous year - a decision that caused great disturbance and disharmony among Free Presbyterians and presaged his decision in May 2008 that he would stand down as First Minister. Leaving the church hurt him.

For decades he could be vicious and bilious in his attacks on the Catholic Church. In 1963 he led a protest against the lowering of the Union Jack over Belfast City Hall to mark the death of Pope John XXIII, a move that won favour with many fundamentalist Protestants.

It spurred him to many other similar such stunts including protests against the visit of Pope John Paul II to Ireland in 1979 and the barracking of the same pontiff the following year in the European Parliament, which led to his ejection from the chamber. There were regular “antichrist” denunciations of whatever Pope was in the Vatican.

There was a puzzlement that the IRA did not seriously try to kill him but the response of republicans was that they needed him to swell their ranks. He railed against republicanism for most of his life, even when in paramilitary terms it was a sleeping beast. In 1964 he helped provoke rioting between nationalists and the RUC by demanding that the Irish Tricolour be removed from republican offices in west Belfast. The following year he threw snowballs at the Fianna Fáil Taoiseach Sean Lemass when in an attempt at North-South rapprochement he visited the unionist prime minister Terence O’Neill at Stormont.

Many loyalists who ended up in prison also ruefully claimed that Dr Paisley, in effect, was also their recruiting sergeant. When the Ulster Volunteer Force murdered two Catholics in Belfast in 1966 Terence O’Neill claimed Dr Paisley was associated with the organisation, a claim he denied.

Dr Paisley somehow managed to keep sufficiently close to loyalist paramilitarism to make it suit his political purposes. But when the going became hot Dr Paisley, like Macavity the mystery cat, was “not there”, managing to distance himself from allegations of complicity with the UVF and UDA.

It was particularly thus at the time of the loyalist Ulster Workers’ Council strike that brought down the Sunningdale powersharing executive of 1974, the precursor of the current Northern Executive - Seamus Mallon’s “Sunningdale for slow learners”.

That sinister Paisley side was also reflected in his parading 500 men up a hill flaunting their gun licences in 1981 and the same year promoting a Third Force to protect loyalists. In 1986 in the wake of the 1985 Anglo-Irish Agreement he was also involved in the loyalist Ulster Resistance. But when that group was linked to loyalist arms smuggling in 1988 Paisley, again like Macavity, quickly got safely onside.

His own political resistance to whatever was the latest attempt at political pragmatism continued too for decades. He was hugely instrumental in bringing down such Ulster Unionist leaders as Terence O’Neill, Brian Faulkner and David Trimble when they tried to achieve reasonable deals with nationalism - his simplistic “never, never, never…never” rhetoric winning the day over more rational moderate political analysis. His political appeal was emotional and atavistic.

But Dr Paisley was a true politician in that he craved power. He naturally denounced the 1998 Belfast Agreement but when the first Northern Executive was formed in 1999 he engaged in a form of political casuistry worthy of any Jesuit by appointing two ministers, Peter Robinson and Nigel Dodds but refusing to have them sit around the Executive cabinet table with Sinn Féin.

The subsequent years were about destroying UUP leader David Trimble, a goal in which he succeeded - but not before Trimble had the courage to help anchor powersharing although at the same time sacrificing his own career in Northern Ireland politics. Finally in 2003 the DUP became the dominant unionist party.

Thereafter it was a slow struggle, with the British and Irish governments trying to act as persuaders, to get him into a powersharing Executive with Sinn Féin and the other parties. It was here that Paisley started using his powerful will and personality for good. He made it perfectly clear to Gerry Adams and Martin McGuinness that without IRA decommissioning and Sinn Fein support for policing there could be no return to devolved government at Stormont.

When that happened Dr Paisley too was prepared to make sacrifices - but again it must be remembered only when he was in unionist control. He did what his deputy Peter Robinson could not have done, persuaded his party to enter into the Northern Executive with Sinn Fein. It led to that famous scene of Dr Paisley sitting alongside Gerry Adams at Stormont in March 2007 and in May being appointed First Minister with Martin McGuinness as Deputy First Minister.

It distanced him from his Free Presbyterian Church and from some in his party but with his wife Eileen providing him with support and strength he pressed ahead and nailed the deal. To general amazement he even struck a real, warm and genuine friendship with Mr McGuinness whom he said was a “man of his word”, and also with former taoiseach Bertie Ahern.

But that needn’t have been so surprising because Dr Paisley always had a huge personality and - a feature that was a saving grace even in the worst of times - a great and often disarming sense of humour.

He stood down as First Minister and DUP leader in 2008 with good grace although earlier this year in interviews with journalist Eamonn Mallie he accused senior DUP figures such as Mr Robinson and Nigel Dodds of having conspired against him to force him from his post. It was ironic that the man who ousted so many unionist leaders should himself feel ousted.

Dr Paisley will be remembered for the good and the bad, but in the end for the good, which in the here and now is what counts. And his final commitment to peace and powersharing was genuine.

In 2008 with Bertie Ahern at the Battle of the Boyne site he spelt out with some emotion what reconciliation should mean. “Each one of us has a solemn responsibility. Our responsibility is to make and to sustain the peace. Of course we have different views. I am a unionist. I don’t need to wear it on a large notice over my heart. The Taoiseach is a nationalist, and he doesn’t need to display it on a sign,” he said.

“We both believe, however, that we should live in peace on this island in which we find ourselves by the over-ruling providence of Almighty God. We both intend that there shall be peace. With mutual respect for one another we want to see that principle triumph all over this island.