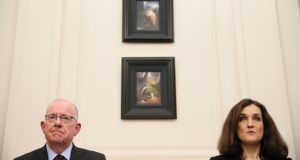 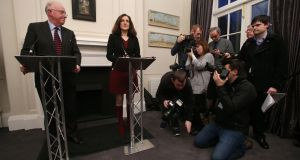 The British and Irish governments have announced a new agreement has been reached to overcome the various crises over the past two years that have stalled political progress in Northern Ireland.

Northern Secretary Theresa Villiers and Minister for Foreign Affairs Charlie Flanagan said that a 68-page agreement, entitled A Fresh Start for Northern Ireland, had been agreed between all the parties after 10 weeks of intensive negotiations.

At a press conference in Stormont Castle just before 5pm on Tuesday, both Ms Villiers and Mr Flanagan said that the impasse had been overcome.

The latest crisis that precipitated the talks was questions surrounding the existence of paramilitaries following the murders in Belfast of Jock Davison and Kevin McGuigan.

The new agreement is designed to implement the various aspects of the Stormont House Agreement from last December, as well as to deal with the impact of continued paramilitary activity.

It sets out a strategy to end paramilitarism and paramilitary groups, set up a new high-level cross-border agency to deal with organised crime and border crime and smuggling.

The agreement also includes a recommitment by the Government to provide funding for the A5, the road connecting Dublin to the northwest and Derry.

The previous Irish government had committed €400 million to the project, but this was withdrawn during the economic downturn.

“This is not only important for economic development in Northern Ireland but also for building an all-island economy that creates jobs and prosperity for all our citizens,” said Mr Flanagan.

The document does not deal with “legacy issues”, one of the key components of the Stormont House Agreement.

The new package will place fresh obligations on Northern Ireland’s elected representatives to rid its society of all forms of paramilitary activity and groups.

In addition, a new high-level tripartite task force, involving agencies from Britain, Northern Ireland, and the Republic, will be established to deal specifically with cross-border criminal activity as well as organised crime.

Mr Flanagan placed particular emphasis on this effort in his statement, saying there was an agreed plan for ending paramilitarism and tackling organised crime.

“A strategy to achieve this will be put in place and an international body will be established to report on the achievement of progress towards ending continuing paramilitary activity in Northern Ireland.”

He said there was a commitment to set up a joint agency task force to identity strategic priorities.

There is also agreement that additional funds of £500 million will be made available by the British government to address “unique issues” in Northern Ireland, including a programme to remove the “peace walls” in Belfast.

The document also paves the way for a full devolution of corporate tax power by 2018.

New measures are also outlined in the document to deal with the contentious issues of flags and parades.

It also gives a commitment to introduce measures to make devolution work better.

This will result in efforts to reduce the number of MLAs in the Northern Ireland Assembly; as well as examining the number of departments now in use.

Speaking at the press conference, Mr Flanagan said: “Last Sunday marked the 30th anniversary of the signing of the Anglo-Irish Agreement.

“It is therefore apt that only two days later we can welcome another milestone agreement that moves Northern Ireland towards better, more stable futures, building on the foundations laid by the Anglo-Irish Agreement.”

The DUP and Sinn Féin have sufficient strength in the Executive and Assembly to drive through the deal.

It will now be for the other Executive parties, the SDLP, the Ulster Unionist Party (UUP) and the Alliance Party to decide whether or not to acquiesce to the deal.

This breakthrough should unlock key elements of the Stormont House Agreement, which was put on hold earlier this year after Sinn Féin and the SDLP refused to agree to welfare changes that they appeared to have originally supported.

The deal should safeguard the future of devolution, which was under threat due to an imminent “unsustainable” £600 million hole in its budget because of the deadlock over welfare reform.

It will provide an additional £2 billion in spending powers for the Executive over the coming five years.

It will also provide £600 million over the coming four years to cushion the effects of welfare cuts in Northern Ireland.

This latest manifestation of the Stormont House Agreement will not be fully comprehensive, with one the key difficulties being put aside for possible future resolution.

This relates to complaints by Sinn Féin and the SDLP that the British government could exploit the issue of protecting “British national security” to prevent the truth emerging in relation to British state killings and collusion.

“The British government are trying to hide behind this label of national security,” Deputy First Minister Martin McGuinness has said.

Under the Stormont House Agreement of last Christmas. an Historical Investigations Unit was to be created to inquire into killings during the Troubles.

An Independent Commission on Information Retrieval to enable people to privately learn how their loved ones were killed was also to be established.

Such legacy issues are not part of the new agreement.

The governments hope that they will be able to resolve these outstanding problems with the parties in the future.

On Monday Ms Villiers acknowledged that it was a troublesome hurdle to overcome.

“It continues to be a significant sticking point. We will continue working on it,” she said.

Mr McGuinness also said on Monday that if this legacy matter was not concluded the parties must press ahead with other elements of the agreement.

The current crisis and the necessity for these talks was partly created by the murder in August of Belfast republican Kevin McGuigan.

It led to PSNI chief constable George Hamilton stating that the IRA was still in existence and that some of its members were involved in Mr McGuigan’s murder.

The DUP Ministers who resigned reappointed themselves for a couple of hours on a weekly basis in a much-derided “in-out” basis.

This was to avoid the Ministries being allocated to other parties.

Ms Villiers said that over the 10 weeks of negotiations she had chaired more than 150 talks sessions.