Dairy sector may face fine of €100m for oversupply 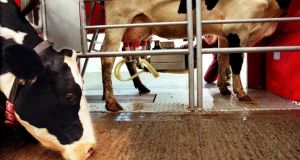 The milk quota regime ends on March 31st, meaning farmers can produce as much milk as they like. Ahead of this farmers have been increasing their milk supply. Photograph: Matt Kavanagh/The Irish Times

Dairy farmers could be facing a €100 million penalty for producing too much milk if current trends continue, according to estimates by ICOS, the representative body for dairy co-ops.

It said some farmers might feel they are better off spilling out their milk rather than paying a large penalty for producing too much.

The milk quota regime ends on March 31st, meaning farmers can produce as much milk as they like. Ahead of this farmers have been increasing their milk supply.

However, any milk produced over the allowed quota up to March 31st still attracts a penalty or superlevy.

ICOS dairy policy executive TJ Flanagan said there was no doubt that Ireland was heading for “a very significant superlevy fine, up to €100 million if we were to stay at 6 per cent over-quota. That’s a lot of money,” he said.

“If the milk price is very low, rather than pay a superlevy they [farmers] would be better off to spill the milk, or spread it on the land, or whatever.”

Mr Flanagan said Minister for Agriculture Simon Coveney was very supportive in trying to find a way of reducing the bill “but the political will isn’t there”.

“There is a very strong group of member states and farm and co-op organisations lobbying hard for some easing of it, but on the other side you have a bigger stronger group who want nothing to be done.”

Mr Flanagan said the opposing countries were blaming states that exceeded their quotas for the collapse in milk prices “and they are certainly not feeling very generous towards them or taking any measures that would ease the quota burden”.

Meanwhile, Lakeland Dairies chief executive Michael Hanley said he had no doubt that the demand for dairy products would continue to grow.

Speaking at the Lismullin Farming Seminar, he said the global population was expected to reach nine billion by 2050 or earlier “so we will have to produce more food annually in less than 40 years than we did in the past 8,000”.