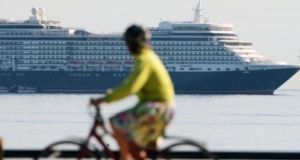 Councillors will get a final vote on whether to include the ban on super-sized cruise ships when the development plan is adopted, expected to be in February. Photograph: The Irish Times

A move by Dún Laoghaire-Rathdown councillors to limit the size of cruise ships allowed to berth in Dún Laoghaire harbour – effectively banning “supersized” cruise ships – has been opposed by council management.

However, in a management response to submissions on the plan the authority’s chief executive Philomena Poole said the ban should be deleted.

Ms Poole’s comments were circulated to councillors on Tuesday. Councillors will get a final vote on whether to include the ban when the development plan is adopted, expected to be in February.

While the management report on the councillors’ proposed prohibition notes a large number of submissions in favour of the proposal, Ms Poole said the harbour was already a protected structure and does not need the additional protection of the ban.

The chief executive’s opposition is significant as Dún Laoghaire Harbour Company has applied to An Bord Pleanála for permission for a cruise berth facility of almost 400m and significant dredging inside and outside the harbour walls.

Ms Poole’s opposition to the ban is also significant as responsibility for the harbour is due to be transferred to the local authority, in accordance with recently passed legislation transferring a number of State harbours to local councils.

In her remarks on the proposal Ms Poole said the draft plan “including the urban framework plan acknowledged that cruise berth infrastructure could form part of the overall harbour development. The council also recognises the potential economic impact that tourists arriving on cruise ships can potentially make”.

However, Cllr Melisa Halpin who proposed the ban said the majority of councillors had expressed their desire to exclude “supersized” cruise ships.

He said the recommendation to delete the amendment aimed at protecting the “Victorian Harbour from cruise ships longer than 250m” makes “a complete mockery of democracy and public consultation”.

“Deciding on the content of the county development plan is one of the few roles that our elected councillors still have. After much campaigning and lobbying by Save Our Seafront and other harbour users the majority of councillors made a very prudent decision that Dún Laoghaire Harbour should focus on the niche market of small cruise ships and leave the super-sized cruise liners to Dublin Port.

“When this plan was put out to public consultation . . . 267 of the 392 submissions were in favour of protecting the harbour. It seems only two called for a deletion of the new amendment” he said.