Curragh Mutiny had disastrous effect on discipline in the British Army 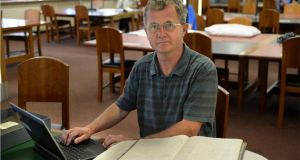 The Curragh Mutiny of March 1914 had a disastrous effect on discipline within the British Army and inflicted irretrievable damage on the careers of many of the key players within it, a conference on the incident heard yesterday.

“Soldiers believed that they had prevented civil war [in Ireland] in the spring of 1914, but it was also at the price of almost destroying the army as an institution,” Ian Beckett, professor of military history at the University of Kent, told the day-long conference. “What then saved the army itself was the Great War, but that also has its price and many of those involved were soon to be dead,” he added.

The conference, attended by Irish and British historians and lawyers, was organised by the Centre for Contemporary History at Trinity College, Dublin, and hosted by the Defence Forces at the Curragh Camp, headquarters of the Defence Force training centre and the epicentre of the events of 1914.

The Mutiny (some historians prefer the word “incident”) occurred on March 20th 1914 when some 60 British Army officers based in the Curragh said they would resign their commissions if ordered to Ulster to suppress unionist opposition to home rule in the shape of the Ulster Volunteer Force, an armed militia.

Over the following four days, a compromise was agreed at talks in London between senior army officers and the Secretary of State for War, Col Jack Seely, who gave a guarantee to the effect that the army would not be used in Ulster.

However, the Cabinet repudiated the guarantee when it was leaked by some of the dissenting officers, prompting the resignation of Seely and several senior army officers, amid soothing words from the government that the whole matter had been a “misunderstanding”.

Several speakers made the point that the mutiny was a deeply serious incident that had significant ramifications, military and political, within Britain.

Despite this, Prof Beckett remarked, in all the contemporary revisiting in Britain of events leading to the first World War, he had come across no references to the Curragh Mutiny.

He said that while it could be argued that in the incident “no order was ever disobeyed” and that what happened amounted to a “hypothetical answer being given to a hypothetical question”, Britain’s Army Council concluded in its wake that the Army was rendered incapable of being used against home rule dissent in Ulster.

Keith Jeffery, professor of British history at Queen’s University, Belfast, told the conference that the incident amounted to a “pre-emptive mutiny” and while it could be claimed that no order had been refused, the response by the British government, showed how its freedom of movement on Ulster and home rule had been limited.

He said the incident came at the time of a perfect storm in British affairs – the question of home rule for Ireland was deeply divisive in England as well as in Ulster, the parties in Westminster were already positioning themselves in readiness for the next election, and politicians and military trainers at Sandhurst, the British Army’s officer school, were acutely aware of, and wished to avoid, the example of the American Civil War.

What he called “windy platitudes” from London failed and the threat of military action by unionists had worked – “a lesson not lost on nationalists,” he said.

Timothy Bowman, a senior lecturer in history at the University of Kent, showed through contemporary media reporting how the mutiny was seen in Ulster. In the view of unionists and the Ulster Volunteer Force, what happened at the Curragh revealed a British Cabinet plot to destroy Ulster.

“The basis of all this is rather hard to work out,” he remarked.

Conference organiser Prof Eunan O’Halpin of TCD said the mutiny was “above all an enormous British constitutional crisis” which he characterised as opposition politicians and maverick army officers plotting to thwart revolutionary changes being ushered in by a government.

The world of Downton Abbey was up against emerging challenges of the early 20th century – from suffragettes, workers seeking better pay, the idea that people should get pensions or that Ireland should have home rule – “the last straw,” he said.

He likened the opponents to change in Britain in the early years of the 20th century to the Tea Party faction in the United States today, saying their Edwardian British predecessors should perhaps be termed the Afternoon Tea Party. Was not the scheming that culminated in the Curragh Mutiny a “calculated act of revenge by the forces of reaction in British society against the Liberals for all the changes they had made in Britain since [the election of] 1906”, he asked.

Two lawyers, senior counsel Roger Sweetman and TCD academic Eoin O’Dell argued the toss as to whether the incident was in legal terms a mutiny. Mr Sweetman (prosecuting) said the mutiny was a conspiracy to pervert government policy and the consequences for Ireland had been “appalling”. The British government completely lost any military initiative to quell growing militarisation of the country, he suggested.

Mr O’Dell, for the defence, argued that a breach of the soldiers’ oath to the monarch was not a criminal offence and, as no order had been given, there could not have been a mutinous challenge to lawful military authority.

Giving judgment, the former Chief Justice of Ireland, Mr Justice Ronan Keane, and Mr Justice Donal O’Donnell of the Supreme Court both found there was no case to answer because no formal order had been issued, against which the men could have been said to have mutinied.

Nevertheless, what happened, said Mr Justice Keane, was “extraordinarily wrong and extraordinarily improper”. He added that it was “far worse” because the Curragh officers “were getting themselves involved in the political business of the country. . . [which was] extremely subversive of the whole British constitution”.

By contrast, Sir Richard Aikens, a Lord Justice of the British Court of Appeal, ruled there was a case for the officers to be charged with conspiracy to mutiny, and also a possible breach of the Official Secrets Act.