Attacks affect not only France but touches people all over the world, people say 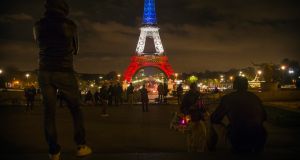 The Eiffel Tower is illuminated in the colors of the French flag in tribute for the victims of last Friday’s terror attacks. Photograph: Eteinne Laurent/EPA

About 100 people braved rain and cold in Corkon Monday night to hold a candlelit vigil in support of those who perished in the Paris attacks at the weekend.

The crowd gathered at the National Monument on the junction of the Grand Parade and the South Mall in Cork city centre at 5.30pm.

Among them was Jeanne Lelong from Angiers in France, who has been living and working in Cork for 18 months.

“My best friend was very near the attack in St Denis - she is safe but it was very scary when I did not have any news from her and when you see so many people died - it hurts a lot,” said Ms LeLong.

“But it doesn’t only touch France - it touches people all over the world and it’s not just what happened in France, it’s the bombing in Lebanon and all the other recent attacks.”

Also showing their support for those who were killed and bereaved in the Paris attacks were Catherine Coffey and her Romanian husband, Lucian Costa.

“It is very important people stand up and support the victims because this was a terror act and people should commemorate all those who were killed no matter their nationality,” he said.

Nicolas Besson from Strasbourg is on an Erasmus exchange at UCC and while he said it was not easy being away from France, Cork and Irish people had shown great support.

He told how he texted his sister Noemie, who lives in Paris, as he watched the death toll rise before she replied to say that she was travelling home to Strasbourg for the weekend.

“It’s pretty hard to be away from France because the first wish is to be back in France with your family and loved ones but it’s great to see Cork people being so supportive.”

His friend, Jemma Barrieras from Barcelona, said that while it was Paris which was the focus of the attack, it really was an attack on freedom everywhere.

Among the many Irish present was Andrew Desmond who said that he wanted to show solidarity not just with the Paris victims but also those who had died in the Beirut bombing.

“We are lucky to live in a multicultural society and in a country that is standing firmly in the modern age- while we are not perfect, we certainly have great degrees of freedom.

“But I’m also here just out of sadness for people like ourselves who lost their lives out enjoying their evening in the simple basic pursuit of happiness only to be killed so brutally.

“The killings in Paris and Beirut just seem so futile and I wanted to come and stand with those who lost their lives and whose families are suffering and grieving for their loss.”