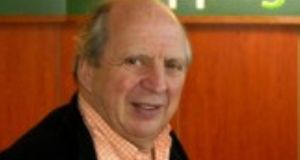 Jonathan Iriwin: has a salary of €90,000 as chief executive of Jack and Jill, but took nothing for the first six years of existence

The founder of the Jack and Jill Children’s Foundation Jonathan Irwin has called on the chairman of the Central Remedial Clinic, Hamilton Goulding, to resign.

Mr Irwin said that he could not understand why Mr Goulding or any of the other directors of the clinic had not put themselves forward for interview or resigned over the top-up controversies.

Lack of regulation
Mr Irwin has been a persistent critic of the lack of regulation in the Irish charities sector and he said the news that charitable donations were being used to top up the salaries of top executives in the CRC really made him angry.

He founded the Jack and Jill Foundation charity in 1997 with his wife, Senator Mary Ann O’Brien following the death of their son, Jack Irwin.

Mr Irwin says he has a salary of €90,000 as chief executive, but took nothing for the first six years of its existence.

He said the public were generally unaware that the State accounts for two-thirds of the €4 billion raised by charities in Ireland, yet there was a lack of accountability.

Work undermined
Mr Irwin feared that the legitimate work done on the ground by the CRC was being undermined by the failure of the clinic’s board to be accountable for what happened.

“I cannot understand how none of the directors have stepped forward or resigned,” he said.

“I think Ham [Hamilton Goulding] should resign. It was his mummy [Valerie Goulding] who started the thing. He should very definitely question the integrity of what has happened here.

“I know resigning is not a big thing in Ireland, but it is appalling what has happened.”

Stand in election
Mr Irwin (72) confirmed his decision to stand in the next general election as an independent in Kildare South, where he lives.

He said the last election showed the appetite for change, but nothing has been reformed in the political system.

“The Dáil is a shambles. We still have people being appointed to Government boards in the same old way. Look at the situation with the quangos. Nothing has changed.

He wanted to announce his decision to stand now 2½ years before the election is due to be called so that others might be motivated to also stand.

“There are lots of people who are totally apathetic. The only way there is going to be change if we make it happen.”