Crane drivers to be balloted on picketing building sites 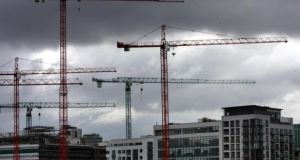 Crane drivers will be balloted on taking strike action in a dispute over pay. Photograph: Eric Luke

Unite union are to ballot members in the crane operators industry to picket more building sites as part of a pay dispute that has been criticised by other unions.

Unite has called for an increase in the minimum hourly rate of pay for crane operators in the union from €16.69 an hour to €24 an hour. Two construction sites were picketed by crane operators from the Unite union in Dublin on Thursday, bringing most work at the sites to a standstill.

Tom Fitzgerald, officer at the union, said the group will be balloting members to expand the picket to all crane operators in the union. Mr Fitzgerald said there “is a big gulf between the union and employers. This will get worse before it gets better”.

The Construction Industry Federation (CIF), which represents construction companies, said the “industry and the wider economy are being held to ransom by the actions of one construction union representing one category of worker”.

A joint pay claim made by several trade unions for a 10 per cent raise in the minimum hourly rate across trades in the construction industry to the Labour Court on Monday June 26th.

The pay claim was submitted by Siptu, the Building and Allied Trades’ Union (Batu), Plasterers Union of Ireland, the Technical Engineering and Electrical Union (TEEU), and Unite. Following the submission of the pay claim, Unite served strike notice for its members employed as crane operators.

In the construction industry, the hourly pay rates of most trades are benchmarked against five different scales, depending on the specialist skill level of the trade. The 10 per cent rise in wages would see hourly rates increase to between €15.17 for a basic operative, to €18.96 for a craft level construction worker.

Unite’s pay demand for a €24 minimum rate for crane operators would be significantly above the proposed set of cross-trade hourly pay scales in the sector.

Siptu division organiser Greg Ennis said “it is crucial that worker solidarity, both between grades and within them, in the construction industry is maintained because of the volatile nature of employment in the sector”.

“The current pay structure, in which earnings for all categories of worker are based on a percentage of the craft rate, crystallises that solidarity. Collapsing that structure would dismantle hard won inter-grade solidarity and result in long-term pain for everybody” Mr Ennis said.

The Labour Court is currently in the process of reviewing the pay claim for a 10 per cent pay rise that was submitted by the five unions, including Unite, on behalf of members in the construction industry.