Rally by former workers was broken up, but large gathering was let remain in courts building

Debenhams staff were moved on by gardaí in Dublin after gathering at the Henry Street Debenhams store, to demand better treatment from the company, which has announced that it would not re-open after the Covid-19 pandemic. Video: Bryan O'Brien 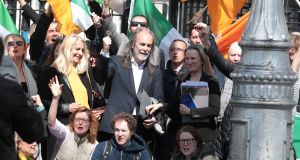 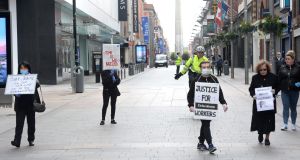 Debenhams workers gathered to protest outside the store on Henry Street, Dublin who were asked to move on by the Garda. Photograph: Dara Mac Dónaill / The Irish Times

Questions have been raised about the enforcement of Covid-19 restrictions after a Debenhams workers’ protest was broken up by gardaí, while a gathering of activists was allowed to proceed in the Four Courts for three hours.

Just before 11am on Tuesday gardaí told five former Debenhams workers demonstrating in Dublin city centre to end their protest because it was deemed “a non-essential journey”.

Saying that while they supported the former workers’ right to protest, the gardaí said they could not do so while the Government’s Covid-19 pandemic restrictions remain in operation, and in law.

However, an hour earlier, dozens of people gathered in the Round Hall of the Four Courts in support of journalist-activists Gemma O’Doherty and John Waters who have challenged the legality of the movement restriction .

People Before Profit TD Bríd Smith said it was “disgusting” that Garda powers were used against the “small and safe” Debenhams protest while the larger group in the Four Courts were allowed to remain. “The two incidents stand in stark contrast to each other,” she said.

“There was no public health issue on this [Debenhams] protest, and it should not fall to the whim of the Garda to decide that workers protesting against the loss of their jobs and income after decades of service is non-essential and not allowed.”

A small number of gardaí monitored the group in the Four Courts but made no apparent effort to disperse them, eyewitnesses said.

Under supporting guidelines to the legislation on controlling the spread of the coronavirus, the Garda has been instructed to deal with people travelling for non-essential reasons in a four-step graduated response – starting with engagement and culminating in arrest – but it has no specific guidelines on how to deal with demonstrations.

By the time the High Court case started, about 100 people had gathered. Some entered the courtroom where the case was being heard, before they were directed to leave by the judge.

However, they continued to congregate outside in the Round Hall until about 1pm. Few, if any, of the group adhered to social distancing guidelines.

Solicitor Gareth Noble, whose firm had received permission to bring an emergency application relating to a special needs child before the courts on Tuesday morning, expressed concern over the gathering.

“When we went down to bring the application we realised it would have been dangerous to move through the group. There was no social distancing and people were blocking the entrance.”

Barrister Tony McGillicuddy said there seems to have been a difficulty enforcing the regulations at the Four Courts: “I would have thought it is problematic [that] any litigant would have a big band of supports coming in. It makes life very difficult for practitioners who are doing their best in trying to mind their own affairs and their own family’s health,” he said.

A Courts Service spokesman said it is “disappointed and appalled that people chose, or organised, today to attend in large numbers, despite not being required to be there – and thus endangered themselves, gardaí, court staff, and court users to infection.”

The Garda had not yet responded to requests for comment.