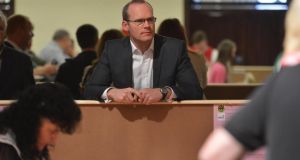 Minister for Agriculture Simon Coveney has urged the Government not to go in for a series of giveaway budgets on foot of today’s poor results for Fine Gael and Labour in the local elections.

“The Government has got a very strong message from people in these elections that they want to see recovery happening more quickly and they want to see the benefits of that recovery. That’s not a surprise because the solutions to the problems we inherited have resulted in hardship,” he said.

“People have had to deal with increased taxation and reduced public expenditure, but I would remind people that there was a context behind all these. We had a banking crisis, nobody would lend us money and we have a huge unemployment rate of nearly 16per cent,” he added.

Speaking in Cork, Mr Coveney said people had decided to take out their frustration through the ballot box rather than through riots and protests and that was “a very admirable quality” in Irish people because “they have shown extraordinary patience with this government”.

“What we are doing is marking the hard yards and I think we are making good progress in that but we need to learn the lessons so that by the time we go to the country for a general election, people not only see stability but they also see benefits for their families,” he said.

“What we are not going to do now as a Government is have some sort of giveaway budget to be popular in the short term after a difficult election ... it would be madness to have a giveaway budget and undo all the hard yards we’ve had to travel for three years to try and fix so many problems.”

Asked about the possibility of Labour becoming nervous about its involvement in Government in the wake of such a disastrous showing in the elections, Mr Coveney said that he couldn’t speak for Labour but he thought it “highly unlikely” the party would seek to pull out of the coalition.

Mr Coveney rejected the suggestion that the Government had any option but to embark on cost-cutting measures to try and get the public finances in order to prevent the country from imploding as a result of the state that Fianna Faíl left it in when they went of office.

“Austerity is bandied around as if it was an option. We have had to fix a country that was in crisis (and) that involved closing a deficit which meant taking in more tax revenue and reducing expenditure. You can call it what you want but we did what we had to do to bring back stability.”

Summing up Fine Gael’s performance, Mr Coveney admitted that it was a bad day for the party but he denied that it was “a collapse” and he said the party would still win four European Parliament seats as well as remain the party with the largest representations on city and county councils.