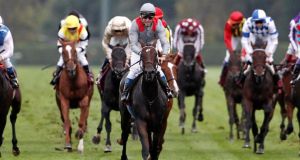 Increasing links between the Irish and Qatari horse industries was discussed yesterday when Minister for Agriculture Simon Coveney met Qatari business people and political figures on the first day of a trade mission to the Gulf region.

There is a growing interest in Irish bloodstock in Qatar. Sheikh Fahad Al Thani of the Qatari royal family and Mubarak Al Naemi, chairman of the Qatar Owners’ and Breeders’ Association both invested in Irish stud farms recently. Qatar Racing also has horses in training with Irish trainers Ger Lyons and Eddie Lynam.

The Qatari royal family has been investing heavily in thoroughbred horses. Earlier this month, Sheikh Joaan bin Hamad Al Thani paid a world-record five million guineas (more than €6 million) for a yearling filly at the Tattersalls bloodstock auction in Suffolk.

Mr Coveney met Mr Al Naemi and representatives of the Qatar Investment and Project Holdings Company, which has strong links to the royal family. He acknowledged their contribution to the Irish horse industry and discussed the potential to enhance links between Ireland and Qatar in this area.

Mr Coveney said the Irish horse sector was recognised globally “but nowhere more than here in the Gulf, as a centre of excellence for breeding, training and all things equine”.

Executives from Horse Racing Ireland and Irish Thoroughbred Marketing are on the mission, as are almost 60 people from the agri-food sector.

Earlier yesterday, Mr Coveney met Qatar’s minister for the environment, Ahamad Bin Amer Bin Mohammed Al Hemaidi. Mr Coveney’s spokeswoman said they had “a wide ranging discussion on the question of food security and the potential of Ireland as a supplier of high quality food products, and addressed a number of specific health certification issues which will help to smooth the way for Irish beef and sheep meat exports to the region”.

Bord Bia is working with 25 Irish food and drink companies and nine agri-service providers on this trade mission, which moves to Abu Dhabi today, and will also take in Dubai and Saudi Arabia in the coming days.

Last year, Irish food and drink exports to the Middle East were worth €275 million.