Court may decide on right of foetus in life support case 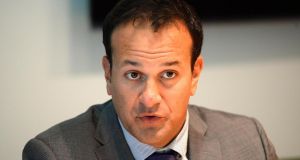 Minister for Health Leo Varadkar “[It’s important] that we give the family and the doctors, who are facing enormous dilemmas now all the support that we can and we try to be as compassionate as we can and not overly certain.” Photograph: Cyril Byrne/Irish Times

The courts may have to decide in the next few weeks on whether doctors are to be allowed to switch off life support for a pregnant woman carrying a 16-week -old foetus.

Some close relatives of the woman are understood to want to have her life support machine switched off.

However, doctors have been reluctant to do this so far.

The doctors are understood to have sought legal advice on whether a decision to end life support for the woman, who is in her 20s, would breach the constitutional right to life of the foetus under the Eighth Amendment introduced in 1983.

Some sources suggested that a key issue for the courts could be how the phrase “as far as practicable” is defined.

It emerged on Thursday that a legal case had been initiated in the High Court on Monday on an ex parte basis (one side only represented) in relation to the continuance or not of life support for a pregnant woman.

President of the High Court Mr Justice Nicholas Kearns put in place restrictions on media reporting of the case.

It is understood the matter will go back before the court early next week.

The foetus is considered to be well below the threshold for viability outside of the mother’s womb.

The HSE is understood to have commissioned legal advice on whether terminating life support for the woman would breach the constitutional rights of the foetus.

Minister for Health Leo Varadkar said he was aware of the current case before he made a speech in the Dáil earlier this week in which he maintained the current legal position regarding abortion in Ireland was too restrictive.

However, he said he did not have access to individual patient information.

When Mr Varadkar was asked about his view on when a referendum on abortion might be held, he said: “Well we are in a slightly different position now because unfortunately a very tragic case has entered the public domain and I think in those circumstances it’s important that we see how that develops.”

“[It’s important] that we give the family and the doctors, who are facing enormous dilemmas now all the support that we can and we try to be as compassionate as we can and not overly certain.”

Mr Varadkar said he believed an absolute solution was unlikely.

“We will never have a perfect law. We will have to continue to amend our laws over time to keep up with medical technology and medical ethics and also societal views,” he said.

Tánaiste Joan Burton said she had been given some details of the case by Mr Varadkar in a phone call last Sunday.

Taoiseach Enda Kenny has said he would not make a “knee-jerk reaction” to sensitive cases involving abortion law.

Speaking in Brussels on the way into a summit of EU leaders, Mr Kenny said he did not wish to comment specifically on the individual case, which was “an absolutely sensitive case”.

“Let anybody put themselves in the position of this family with the trauma and the stress and the pressure that’s involved. I do not want to say anything about this or any individual case here.

“As I said yesterday in Dublin, there are circumstances that arise occasionally where clearly complexities exist obviously, and they’re outside the scope of the legislation.”