This new footage shows more gas flaring after intense flaring was caught on camera New Year’s Eve. The Corrib gas plant in north Mayo has been a matter of contention for local residents. Video: Shay Fennelly 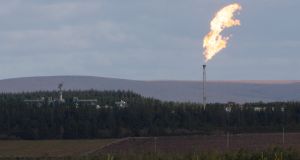 The Government is seeking tenders to monitor the Corrib gas pipeline on behalf of the Department of Energy.

The monitoring will require spot checks of the high pressure pipeline carrying gas from the Corrib field to an inland refinery and its shore valve, according to details published this week on the eTenders website.

The contract is initially for two years only, and will involve weekly reports to the department and answering any queries that the public may have about the project.

The successful consultant must undertake not to work for any other client in the Irish onshore and offshore sector, the tender states.

The contract comes after consent for running the controversial pipeline was issued by Minister for Energy Alex White on December 29th last with 20 conditions.

Separate monitoring of safety at the onshore refinery, the offshore subsea facilities and connecting pipelines is being conducted by the Commission for Energy Regulation (CER), while the Environmental Protection Agency (EPA) is responsible for atmospheric and marine emissions from the Ballinaboy terminal.

However, residents living close to the project have queried the delay by the EPA in concluding and making public its investigation of intense flaring of gas on December 31st at Ballinaboy - a day after Shell announced the first gas was being pumped ashore.

The residents have also expressed concern about the duration of intense flaring on Wednesday of this week.

Flaring, or the burning off of flammable gas, is activated if there is a pressure rise within the plant, or a confirmed fire or gas release.

Flaring worldwide is a significant contributor to greenhouse gas emissions.

The EPA license for Ballinaboy states it shall only be used for “safety reasons” or for “non-routine operational conditions”.

The New Year’s Eve flaring was acknowledged as “exceptional” by Shell E&P Ireland, and was sighted from Achill Island to Crossmolina.

It issued a text this week alerting residents to a flare lasting 35 to 40 minutes during tests on Wednesday, February 17th.

However, farmer Gerry Bourke, who lives near the terminal, and Rossport resident Mary Corduff said flaring continued right throughout the day, and was at times very high.

Shell did not respond to queries on the flaring, but the EPA said that Wednesday’s incident was a “planned event required by the CER, in order to test the site safety/depressurisation systems”.

However, the CER said it “did not order the carrying out of these tests”, and said they were “part of normal operations to ensure the safety systems meet the required performance standards”.

The EPA said it had its own inspector on site on Wednesday morning.

The agency said it was continuing its inquiry into the New Year’s Eve flaring as part of an “ongoing compliance” investigation.