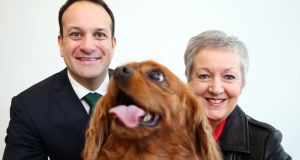 Minister for Social Protection Leo Varadkar and Rowena Gillen from Rosie’s Trust and with Holly at the launch of the new Eir fund. Photograph: Marc O’Sullivan

Mr Varadkar was attending the launch of Eir’s Connecting Communities fund which will see €160,000 a year, split between four provinces, given to charitable projects over the next four years. Some 50 charities in total will be involved in it.

He said Eir was an example of a company with a well-thought out corporate social responsibility strategy, but suggested Ireland was a long way behind the United States in that regard.

He said companies should not just be about profits and shareholder value, but also about corporate responsibility. He cited some semi-State companies and IBM, which give employees time off to work on corporate social responsibility programmes, as good examples in Ireland “but Irish companies could do a lot more”.

Among the recipients of the Eir fund will be the National Council for the Blind Ireland, which will run an intensive IT training camp for companies and children who are blind or vision-impaired, and Rosie’s Trust which supports people that are terminally ill.

Eir head of corporate social responsibility Michelle Toner said the company was in every community in Ireland, so it was important to be able to give back in a very meaningful and tangible way.

“Over the past nine months we have worked with 17 not-for-profit organisations across a range of social issues including homelessness, employment and educational supports in disadvantaged areas,” she said.

“We have had the opportunity to meet and work with new groups that are effecting real positive change in their community every day. We’re proud to be part of their story.”