Dublin city centre on a Friday night, normally teeming with life as crowds of people spill out of shops and workplaces into pubs and restaurants has effectively become a ghost town. Video: Bryan O'Brien 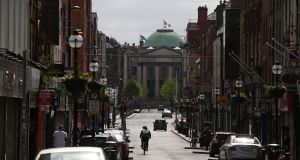 One of the measures announced is the implementation of “emergency Covid-19 social distancing measures” in Ranelagh, Rathmines, Stoneybatter, Dorset Street and Capel Street from Monday, April 20th. Photograph: Nick Bradshaw / The Irish Times

Dublin City Council will carry out works in areas across the city next week, in order to give more space to pedestrians and enable social distancing during the coronavirus pandemic.

In a letter to elected members of the council, chief executive Owen Keegan provided an update on measures being taken to tackle the spread of coronavirus, also known as Covid-19, in the local authority area.

One of the measures announced is the implementation of “emergency Covid-19 social distancing measures” in Ranelagh, Rathmines, Stoneybatter, Dorset Street and Capel Street from Monday, April 20th.

The works will involve removing loading bays and parking spaces to provide additional space for pedestrians where there is evidence of footpath congestion.

Orcas and bollards will be installed to protect these spaces as well as existing cycle tracks from incursions from vehicles. A counter flow cycle lane will also be installed on Nassau Street.

The decision to implement these measures comes following calls from lobby groups and local politicians to allocate additional space to pedestrians and cyclists during the pandemic, following examples from other European cities.

Dublin Commuter Coalition, the lobby group, said it was important these measures were introduced to ensure the safety of pedestrians not just due to social distancing measures, but also to reduce road traffic collisions.

Kevin Carter, chairman of the coalition, the news that they will be implemented is “hugely welcome”.

“However, we recognise that Dublin is a large city and the examples given that will receive this treatment is few and far between. We would like to see it aggressively deployed across the city,” he added.

Kevin Baker, chairman of the Dublin Cycling Campaign, which lobbies for safer cycling infrastructure, said this step is important for essential workers.

Speaking about the cycle lane on Nassau Street, he said: “So many essential workers, like healthcare staff, have swapped to cycling to work because they’re trying to avoid using public transport.

“We should be doing all we can to make it easier for them and to ensure their safety.”

Donna Cooney, Green Party councillor said she is “delighted” the council is being so proactive.

“I’m hoping they’re going to extend it out. There are particular roads I’d like to see it happen in as well, like Collins Avenue and East Wall Road,” Ms Cooney said.

“While they’re temporary measures, hopefully people will see the benefits of this and they will be retained after the crisis. That is what tends to happen internationally.”

In his letter, Mr Keegan also told members that parks will remain open “despite problems in terms of compliance with social distancing”.

He added: “Park staff, with the support of An Garda Siochána, are intervening in an attempt to address problems as they arise.”

Further restrictions to be considered in Dublin and elsewhere as Covid-19 cases rise 08:25
Sinn Féin’s Michelle O’Neill calls Van Morrison’s anti-lockdown songs ‘unhelpful’ 08:12
Coronavirus: Almost half of Irish people believe the worst ‘is ahead of us’ 07:17
Budget 2021: Women’s council calls for increased payments for new parents 05:31
How to get ready for a graduate scheme 05:00