Over 50,000 visitors expected for city’s parade which will be led by a fleet of cars made in Cork 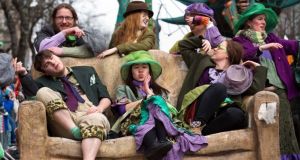 Henry Ford may well have declared that “history is bunk” but 100 years of Ford in Ireland is about to be recalled and celebrated when the car manufacturer takes pride of place in this year’s St Patrick’s Day Festival in Cork.

The son of an emigrant from Ballinascarthy in west Cork, Ford set up the Ford Motor Company in Detroit in 1903 and 14 years later on April 17th, 1917, he set up Henry Ford & Son in Ireland with manufacturing starting two years later at its plant at the Marina in Cork.

According to a report in The Cork Examiner at the time, “the objective of the company is to carry on the business of manufacture of all kinds of machinery, agricultural implements, engines, motor cars, aeroplanes and airships and shipbuilders”.

Over the next 67 years, until the plant finally closed in 1984, Ford was an integral part of not just the commercial life but also the cultural experience of Cork. That history will be recalled when Ford participate in this year’s St Patrick’s Day parade which is expected to attract 50,000 visitors.

Lord Mayor of Cork Cllr Des Cahill said the parade will be led by a range of Ford vehicles from down through the years, many of which were manufactured at the city’s Marina, including the iconic Model T, the Fordson tractor and the Cortina.

“The theme of this year’s parade is Cork: A city of community, culture and commerce, and the parade will celebrate the strength of community, diversity of culture and entrepreneurship that has helped shape Cork into a modern vibrant city,” he said.

Chairman and managing director of Ford Ireland, Ciarán McMahon said the city’s parade is “always a great celebration and is the ideal opportunity for us to mark the 100th anniversary of Henry Ford’s return to his ancestral home-city to establish the company’s first purpose-built factory outside of North America in April 1917.”

Dowtcha, a puppet and carnival arts company who work from premises at the old Ford factory site will join 3,000 other participants including a number of marching bands, local street performers and Cork Community Artlink who will be joined by the highly acclaimed street performance groups, Macnas from Galway and Spraoi from Waterford.

Further information on the Cork St Patrick’s Festival is available on visit www.corkstpatricksfestival.ie.