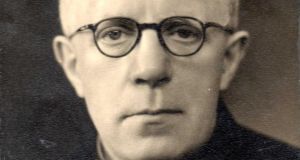 Cork priest Fr Tom Duggan who volunteered as a British army chaplain in both World Wars and was awarded the Military Cross for bravery and an OBE by King George VI.

Fr Tom Duggan certainly lived a life less ordinary. He served in the British army in the first World War and ended up as a PoW; became friends with IRA leaders; volunteered again for the British army in the second World War and was awarded an OBE by King George VI. His travels didn’t end there – after he died he was buried no less than three times.

Now medals – including the prestigious Military Cross – awarded to the Cork priest for his service as a British Army chaplain during the second World War are expected to sell for up to €10,000 on Wednesday (July 1st).

Fr Tom Duggan died in 1961, having served as a Catholic chaplain in both World Wars. He first joined the British army as a volunteer chaplain in 1917 and was sent to Flanders, where he served with various Irish regiments before being taken prisoner by the Germans, according to Woodward’s Auctioneers in Cork.

After the war Fr Duggan returned to Cork and became a staunch nationalist. His friends included Tom Barry, one of the most prominent IRA leaders in the War of Independence. Fr Duggan attended Barry’s wedding along with Michael Collins and Éamon de Valera.

He served in various parishes in Cork but, despite his age, he again volunteered as a British army chaplain in 1939.

He was assigned to the Durham Light Infantry Regiment and served in France where, aged 50, he was awarded the Military Cross for his “exemplary gallantry against the enemy” during the British evacuation of Dunkirk. He was later awarded an OBE by King George VI.

After the war, Fr Duggan became rector of St Finbarr’s seminary in Farranferris in Cork and later parish priest of Kinsale, then Ballyphehane and finally, in 1961, St Patrick’s parish in the city. He was promoted to archdeacon.

However, in October 1961, aged 71, he decided to become a missionary priest in Peru, where he joined St James the Apostle Missionary Society, established by Cardinal Cushing of Boston.

Just 41 days later, while studying Spanish and preparing for his new role in the suburbs of the capital Lima, Fr Duggan died of a heart attack on December 17th, 1961. After a funeral Mass celebrated by Cushing who was visiting Peru, he was interred in the British cemetery in Lima.

Fr Duggan was honoured in Cork in 1977 when Cork County Council named a new bridge at Kinsale the Archdeacon Duggan Bridge.

Fr Duggan’s medals, including his MC and OBE, are on view at Woodward’s auctioneers in Cook Street, Cork, ahead of Wednesday’s auction.