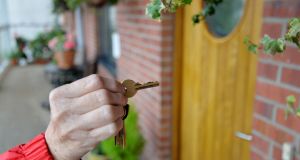 Cork City Council’s ability to tackle the housing crisis could be hampered if the city is not allow extend its boundary, the Joint Oireachtas Committee on Housing and Homelessness heard. File photograph: Alan Betson/The Irish Times

Cork City Council’s ability to tackle the housing crisis in the city could be hampered if the city is not allow extend its boundary, a senior council executive has told the Joint Oireachtas Committee on Housing and Homelessness.

Cork City Council deputy chief executive Pat Ledwidge said that historically the council has provided one third of all the city’s housing units in a manner that maintained a balance between local authority and private housing throughout the city.

“However, it is an ongoing concern for me that the capacity of Cork City to continue to meet the totality of housing demand in a sustainable manner is now fundamentally compromised by the scarcity of development land within the existing city boundary,” said Mr Ledwidge.

Mr Ledwidge and Cork City Council director of services for housing Valerie O’Sullivan told the Oireachtas committee the city’s population had risen by 5 per cent - or 4,390 people - between 2011 and 2016, while employment levels in the city had risen by 9 per cent over the same period.

However, they pointed out that while the figures were encouraging, many employers had identified a lack of housing within the city as a barrier to further recruitment which underlined the urgency of addressing the housing supply shortage.

In June, then minister for housing, planning, community and local government Simon Coveney published the report of the Expert Advisory Group on Local Government Arrangements in Cork which recommended a major extension of the city boundary.

While most commentators were not surprised that an extension of the city would incorporate built-up areas of Douglas, Donnybrook, Grange, Frankfield and Rochestown, all contiguous to the city, the inclusion of Ballincollig, Blarney and Carrigtwohill in such a proposed expansion surprised many.

The report has proven almost as divisive as its predecessor, the majority Smiddy report published in 2015, which recommended the amalgamation of Cork City Council and Cork County Council into a single county council.

Both Cork County Council management and members have warned that allowing the city to extend into areas suggested by Mackinnon would seriously undermine the county council’s ability to provide a full range of services, as it would lose some of its most lucrative rates base to the city.

The Mackinnon group recognised the expansion would result in revenue loss to the county council of €40 million per year as the areas it would lose currently generate revenues of €86 million per year in Local Property Tax and commercial rates, of which some €46 million is spent in the area.

To counteract this loss of revenue, the expert group recommended that the city council would pay some €40 million per year in compensation to the county council for a guaranteed period of 10 years with a review thereafter.

But at a recent county council meeting, Vicarstown-based Cllr Bob Ryan of Fianna Fáil - who would lose part of his Blarney and Tower base if the extension is granted to the city - strongly condemned the Mackinnon report, despite it being backed by his party leader, city-based Micheál Martin.

“If this document was produced under British rule, it would have brought about revolution, and it should. This is a diktat we can’t accept,” said Cllr Ryan, adding that the expansion would divide parishes and it was clear the authors had no idea how rural Ireland worked.