NI powersharing deal down to DUP and governments - Michelle O’Neill 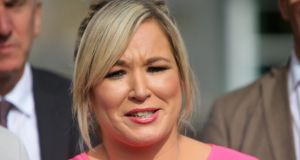 Sinn Féin Northern Ireland Leader Michelle O’Neill has said: “Sinn Féin remain fully committed to making the negotiations work, and in getting the executive back up and running and delivering for all in society.” File photograph: Paul McErlane/EPA

Sinn Féin leader in Northern Ireland Michelle O’Neill has said the “key to restoring the powersharing executive rests at the feet of the DUP and both governments”.

Ms O’Neill was speaking in Dublin ahead of Sinn Féin’s Ard Comhairle (officer board) meeting on Saturday afternoon.

“Sinn Féin remain fully committed to making the negotiations work, and in getting the executive back up and running and delivering for all in society,” she said.

“The same approach is needed by the other parties and both governments.”

Powersharing in Northern Ireland broke down in January due to disputes between Sinn Féin and the Democratic Unionist Party (DUP) over an inquiry into the “cash for ash” scheme.

Since then the main logjam preventing a new powersharing agreement has been over a proposed Irish Language Act.

Sinn Féin have long wanted an Irish Language Act in the North, which would essentially give citizens the right to deal with the state, the Northern Assembly or the courts through Irish.

The DUP has opposed the measure due to fears over what it would cost, and have insisted any deal on an Act would have to include the Ulster Scots language.

Talks have also stalled over Sinn Féin’s demand for reform on marriage equality in the North, which has been opposed by the DUP.

Northern Irish Assembly elections were held on March 2nd to try to form a government, the results of which saw SF and the DUP emerge again as the two largest parties.

The deadline to nominate a first and deputy first minister and set up a new powersharing executive on March 27th passed without a deal between the two sides.

Talks have now been suspended for the summer and will resume again officially in a number of months.

Ms O’Neill today said: “If talks are to be constructive, there needs to be a break from the failures of the past. There can be no return to the status quo that failed so many sections of the community.

“With the week that has been in it, I welcome that the marching season and the 12th of July has passed relatively peacefully,” she said.

“However, sectarian and racist displays at bonfires and the failure of Unionist leaders to challenge this demonstrates the distance yet to be travelled.”