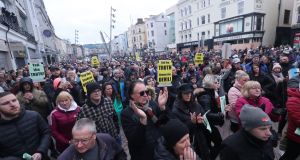 An anti-lockdown rally has passed off without incident in Cork city centre as a succession of speakers strongly criticised the Government’s response to Covid-19 to enthusiastic applause from a crowd estimated by gardaí to be around 700 strong.

A large Garda force was evident in the city centre from around midday on Saturday while the Garda Air Support helicopter hovered overhead throughout. The hour long gathering at the junction of Patrick St and Winthrop Street was dubbed by the organisers as ‘A Rally for Truth’.

Among the speakers was former Cork County Councillor, Diarmuid O Cadhla, who claimed the Government were lying about the numbers of people dying from Covid-19 and creating fear among people for a lockdown that was unnecessary.

“People are genuinely frightened – they are living in fear, needlessly,” said Mr O Cadhla, who accused the Government of “spinning the figures” and said they were focusing on “one disease that was a minor cause of death” rather than investing in a proper public health system for everyone.

“In the last week, they told us that thankfully numbers are coming down – I would put it that is because spring is in the air – the summer is coming and the flu-like symptoms, which is what Covid displays, are missing in the summer- they reduce dramatically.

“The banks and big pharma are going to make trillions of dollars in profit from this crisis and we, the people are again being used as cannon fodder to enrich the richest in our society. We need media that tell us the truth and we need journalism that finds out the truth and we are not getting that.”

Earlier another speaker, Kilworth native Peter O’Donoghue, who described himself as an ordinary family man, said he was attending the rally simply to show his frustration with the Government and what he said was its “unconstitutional use of lockdown against Covid”.

“I march for all the people who have died lonely from all causes since this lockdown started and were never given a proper funeral – I march for their families too who have not been able to grieve properly because of this unnecessary lockdown,” he said.

Another speaker, Louise Donnellan from Carrigaline thanked people for turning out today to “show Micheál Martin and Leo Varadkar that we are standing up for our democratic rights, our rights to freedom, our rights to travel around this country and this island in peace.”

Another speaker, Paddy Bulman from Youghal claimed the Government was telling people to stay at home to stop the spread of the virus but what they really wanted was to stop people spreading was the truth and prevent theme from exercising the sovereign right to chose their form of government.

“They will remove your constitutional rights and lock you in your homes and when you question it, then they accuse you of being a virus ridden, far-right, neo-nazi, crypto-fascist, disobedient general public – this is not about stopping the spread of the virus, it’s about stopping spreading the truth,” he claimed.

Among those attending the rally were twins, Katriona and Pamela Mackey, both members of the Cork camogie team who said they were not right-wing extremists but were deeply concerned about the collateral damage that the lockdown was having on people’s physical and mental wellbeing.

“I don’t think the Government and Nphet (National Public Health Emergency Team) have taken into account the impact of lockdown on people’s mental health at all – we can no longer ignore the collateral damage – a few weeks was fine but 12 months later, what actually has changed – nothing has changed,” said Katriona from Douglas.

A number of people at the rally wore masks but the vast majority did not have any face coverings while social distancing rules were almost totally ignored with virtually no one keeping a two metre distance from the person next to them, leading to huge congestion on the streets.

The rally finished up with well known Cork busker, Shirley Scannell singing “The Our Father” as Gaeilge before Mr O Cadhla led the crowd, a handful of whom carried tricolours, in a rendition of Amhran na bhFiann before they dispersed peacefully.

According to Garda Press, gardaí in Cork City put in place a policing plan involving over 200 members of the force, including the Garda Mounted Unit, the Garda Dog Unit and the Garda National Public Order Unit but none of the three units were deployed as no issues arose with the event.

One person was arrested for public order offences while a street entertainer who performs as a fire eater, was arrested for a breach of Section 31 (a) (9) of the Health Act 1947 when he arrived at the scene of the rally with a canister of petrol and refused to comply with a garda direction.

Under Operation Fanacht, the ongoing national operation in support of Public Health Regulations, additional high visibility checkpoints were established on all major approach roads to Cork city by gardaí in Cork North and Cork West Divisions to ensure travel restrictions were observed.

Officers arrested four others – three men and a woman – in counties Cork, Kerry and Kildare in what they say were arrests “linked to the event in Cork city” after they failed to comply with gardaí directions under the Section 31 (a) (7) Health Act 1947.

Gardaí had warned members of the public in advance not to attend the city centre protest and they had put a large policing plan in place.

Garda sources said the violence that occurred at an anti-lockdown event in Dublin last weekend had informed the preparation of the policing plan for the Cork protest, though the organisers of the Cork event say they are not affiliated in any way with those behind last weekend’s Grafton Street protest.