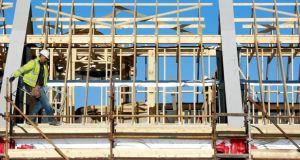 A building company of Paddy McKillen jnr has initiated a High Court challenge over the Government’s decision to extend regulations preventing the firm, and some 60 per cent of the construction industry, from operating.

Rossa Fanning SC, for Blue Whisp, part of Mr McKillen’s Oakmount Group, said the matter is urgent as works by his client to develop 48 apartments on a site known as The Pinnacle in Mount Merrion, Dublin, have been halted since January 8th, with “very serious” commercial consequences.

The judicial review application was being initiated now because the original extension of the regulations was to today, Friday March 5th, but it is anticipated a statutory instrument will be promulgated to extend them from March 6th to at least April 5th.

Mr Fanning, with Stephen Walsh BL, said the case against the Minster for Health is that the regulations are irrational, disproportionate and unlawfully discriminatory for reasons including they permit certain construction works – including public housing and development of data centres – but do not permit the building of private housing in the midst of a housing crisis.

His side was not overlooking the significant public health challenge posed by Covid-19, and accepted the Government faced an unenviable task in trying to balance public health and economic considerations and should have some margin of appreciation, counsel said.

However, the criteria when deciding what activities are, and are not, permitted has to be public health and the Government cannot, for example, decide to permit golf to be played only on private course and by men, he said.

The current situation is that public versus private considerations are driving what construction activity is permitted and what is not, he said. The exemptions for certain activities are being decided by the purpose of the construction project when Covid-19 does not distinguish between a data centre and a private housing development, he said. That is “unjustifiable discrimination” and also did not take into account the changes in the public health landscape since January.

His case included claims the current restrictions permitting 40 per cent of construction activity but preventing the remaining 60 per cent is unreasonable, flies in the face of common sense and scientific evidence and took into account irrelevant considerations, including the purpose of the construction project. The failure to permit the entire construction sector to reopen amounts to unlawful discrimination, is disproportionate and breaches the Minister’s duties of fairness and equal treatment, it is argued.

Mr Fanning also said there is marginal evidence of Covid-19 infection associated with the 40 per cent of the construction industry that is operating.

Counsel said his client is not seeking mandatory orders but rather wants the court to overturn the restriction electing between different types of construction, mainly on a public/private sector basis or on a ranking “that has no resonance in public health”.

Mr Justice Charles Meenan, having heard an outline of the intended case, told counsel he would manage it in the same way as other challenges to the regulations.

The judge directed the application for leave to bring the judicial review proceedings should be made on notice to the respondent, the Minister for Health, and returned the matter to Friday next.

Noting there has been correspondence between the sides, and the Minister has rejected the arguments made, the judge said the respondents can indicate on March 12th whether they intended to oppose the application for leave or would agree to a telescoped hearing, involving the leave application and the main challenge being heard together.