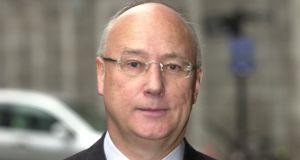 Solicitors representing John Caldwell stated in a letter to the tribunal dated January 31st, 2002, that Mr Caldwell “had now and did previously have what amounts in his opinion to an indirect beneficial interest” in the lands.

The ownership structure of 108 acres in Carrickmines was “complex and was designed at all material times s to conceal the ultimate personal beneficial ownership of those lands”, the planning tribunal has found.

The final chapter of the planning and payments tribunal includes a section setting out evidence relating to the legal ownership of the Paisley Park/Jackson Way lands, something it had found “extremely difficult” to ascertain.

Of the approximately 130 acres of lands in the Carrickmines Valley in south Co Dublin dealt with by the tribunal, 108 acres were purchased by Paisley Park Investments Ltd in 1991.

Wound up
Paisley Park was subsequently wound up and, in 1993, a company– later renamed Jackson Way Properties Limited – was acquired to hold the Carrickmines lands in trust for two offshore companies.

Solicitors representing John Caldwell stated in a letter to the tribunal dated January 31st, 2002, that Mr Caldwell “had now and did previously have what amounts in his opinion to an indirect beneficial interest” in the lands.

It went on to say that: “In March, 1988 [businessman Jim Kennedy] informed our client [Mr Caldwell] that he had agreed to buy the lands for £540,000 and enquired of our client as to whether he would take a 50 per cent interest in the transaction. Our client agreed to this proposition.”

‘Asset protection’
Mr Caldwell later told the tribunal the ownership structure for the lands for both himself and Mr Kennedy was devised for tax planning and “asset protection” purposes.

Other than Mr Caldwell’s evidence to it that he and Mr Kennedy were both 50 per cent individual beneficial owners of the lands, the report noted the tribunal “has not referred to any documentary or corroborative evidence which confirmed that this was indeed the case”. However, it stated: “Whilst the tribunal was unable to definitively identify all of the beneficial owners of the [Paisley Park/Jackson Way] lands it was satisfied that, as claimed by Mr Caldwell, both he and Mr Kennedy, (and for a short period Sam Stanley), were beneficial owners.”