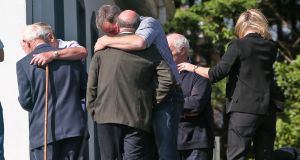 Mourners at the Lakelands Funeral Home in Cavan town where the remains of the Hawe family are reposing. Photograph: Colin Keegan/Collins Dublin

Lakelands Funeral Home stands on top of a hill overlooking a shopping centre in Cavan town.

From early afternoon, the two roads leading into it were blocked off and signs indicating no parking were erected.

Stewards from the local Cavan Gaels club and gardaí shepherded the crowds down the long, steep road which leads to the entrance to the funeral home.

The bodies of Alan Hawe (41), his wife Clodagh (39) and their sons Liam (13), Niall (11) and Ryan (6) have been reposing there since being taken from their homes in in Barconey Heights, Ballyjamesduff, on Monday.

By 3pm, the appointed time for visiting on Friday, there was a queue of people outside the front gate and it continued non-stop until 8pm.

Among those paying their respects were Fianna Fáil TD for Cavan-Monaghan Brendan Smith and other local politicians.

Two priests came and stated afterwards they did not know the family involved but wanted to pay their respects. Members of the local Indian community came and left together. Children from local schools also attended in groups.

Lakelands has become a focus for the whole of the county, though it is 20km from the Hawe family home in Ballyjamesduff, Co Cavan, where their bodies were found on Monday. Nobody gathered there wished to speak to the media about the murder-suicide .

The bodies will leave the Lakelands on Saturday afternoon to make their last journey back to Ballyjamesduff. The funeral takes place at St Mary’s Church, Castlerahan at 4pm.

The chief concelebrant will be Fr Phelim Kelly, curate of the parish.

Such are the expected crowds that the church is being reserved for family and local people only. The service will be broadcast on loudspeakers to those attending outside.

Though Mr Hawe is believed to have murdered his wife and their three children before killing himself, both families have requested that all five be buried together in the local cemetery beside the church.

Mr Hawe and his children had attended his grandmother’s anniversary Mass in the church just 48 hours before their bodies were found.

The motives behind Mr Hawe’s actions are still being examined. Detectives are now set to focus on speaking to friends and colleagues of Mr Hawe. He was the deputy principal at Castlerahan National School, while his wife taught at Oristown National School in Co Meath.

On her Facebook page on Friday Ms Connolly referenced the death of their brother Tadhg in 2010.

Earlier in the week she shared an Irish Times story which stated that the gardaí were examining Mr Hawe’s mental state before he killed his wife and children.

“A bit of truth at last! RIP our wonderful Alan, Clodagh, Liam, Niall and Ryan we love you all our angels xxxxxxxx.”

The family home was still being examined on Friday by detectives.

Mr Hawe is a native of Windgap, Co Kilkenny. Prayers are being said for the family this weekend at St Nicholas Church in the village.

In response to suggestions that media reports were focusing on him rather than his wife and children, a hashtag #hernamewasClodagh was trending on Twitter on Friday.

The domestic abuse charity Women’s Aid has reported an upsurge in calls to its helpline this week, with many callers referencing the Ballyjamesduff tragedy.