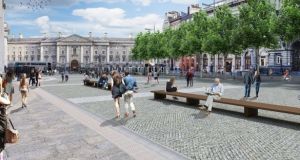 A architect’s image of the proposed College Green plaza.

College Green in Dublin city centre will be traffic-free for three days this summer, the business representative group Dublin Chamber has confirmed.

In a tweet it said College Green, the area in front of the Bank of Ireland, would be pedestrianised on Sunday July 21st, Sunday July 28th and Sunday August 4th.

The aim is to test the popularity of a car-free plaza at College Green. A programme of family events are planned on these days to encourage people into the city centre.

Dublin City Council has put forward a plan for a €10 million traffic-free plaza which has been rejected by An Bord Pleanála.

The council is expected to reapply for permission for the plaza in the coming months.

Confirmed: College Green Plaza to be trialed for 3 full days this summer: on Sunday 21 July, Sunday 28 July and Sunday 4 August. Exciting for the city! #BetterDublin pic.twitter.com/wLdZpDHwf6

The board last November rejected the pedestrian and cycle plaza scheme due to concerns about the “significantly negative impacts” it would have on bus transport and traffic in the city.

The council intends to lodge a fresh application to the board by the middle of this year. However, its head of traffic management Brendan O’Brien said it was unlikely the plaza proposals would change.

“An Bord Pleanála themselves in their judgment, and in the inspectors report, found the plaza was a good idea. Architecturally there were no real issues with it,” he said. “The issues were the knock-on consequences of the plaza rather than anything to do with the plaza itself.”

In its ruling last November the board said “the principle of the proposed development is acceptable” and that it would produce a “quality public realm” and would “facilitate improved appreciation of the architectural and cultural heritage of this important site”.

However, it would not give permission because of the traffic implications for the city, particularly on buses.

The board said there was “uncertainty” about the potential effects on the bus system, but they were likely to be “significantly negative in the light of the scale of rerouting of buses proposed, the critical importance of bus transport to the city, and its future role in facilitating modal shift from public car usage, in line with national policy”.

It criticised the traffic analysis done by the council and was not satisfied it was “sufficient to accurately quantify the traffic impacts of the proposed development and the magnitude of those impacts”.