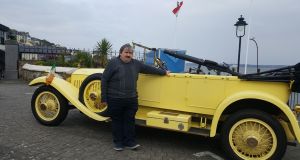 Author John Jefferies with the Rolls Royce “Moon Car” on Cobh Pier at the launch of “Death on the Pier”. Mr Jefferies is a descendant of one of the episode’s key participants, IRA man Daniel “Sandow” O’Donovan

It was described by the then president of Dáil Éireann, William T Cosgrave, as “a dastardly outrage” without parallel “in its deliberation and its savagery” but for many Irish people, the gun attack by a group of IRA men on unarmed British soldiers in Cobh in 1924 has long been lost in the mists of time.

But now the incident, which prompted one British MP to suggest that Ireland needed another Cromwell, has been chronicled in a carefully researched work by Cobh man John Jefferies, a descendant of one of the key participants, IRA man Daniel “Sandow” O’Donovan.

“I first read of the Cobh Pier Head attack around 2004 when my cousin Jim O’Donovan gave me a photograph of a ‘Wanted’ poster which listed the names of five republicans headed by that of my maternal granduncle, Sandow O’Donovan,” said Mr Jefferies.

“I was only 12 when he died but I knew of his involvement in the IRA and I would have heard about some of his exploits during the War of Independence and the Civil War but I had not heard about the Pier Head attack of 1924 or his alleged involvement in it,” he added.

Seeing the poster whetted Mr Jefferies’ interest and over the following decade he began researching how a small group of anti-treaty republicans decided to attack a party of British troops based at Spike Island where Britain had retained a base as part of the Anglo Irish Treaty of 1922.

The party of 50 British soldiers, along with some civilians, had just landed at the pier in Cobh when the IRA men, travelling in a Rolls Royce – known as the Moon Car – opened fire with two Lewis machine guns injuring 18 soldiers and killing one, 18-year-old Pt Herbert Aspinall from Rochdale.

Mr Jefferies discovered that Pte Aspinall’s mother was from Mayo while his funeral was one of the largest ever seen in Rochdale with 30,000 people lining the streets as he was brought to Rochdale Cemetery. However today he is all but forgotten with only a small marker stone to indicate where he is buried.

While the Cumman na nGaedheal government issued a poster naming five suspects, Sandow O’Donovan, Frank Busteed, Jim Gray, Miah Gray and Peter O’Shea, only the Gray brothers were ever charged in relation to the attack but the case against them collapsed and they were released.

Although the five men who opened fire on the British soldiers were wearing Free State Army uniforms, Mr Jefferies believes it was part of a plan by republicans to exploit a mutiny by some senior officers in the Free State Army with a view to resuming hostilities with the British.

He said Maj Gen Liam Tobin and Col Charles Dalton were both very close to Michael Collins and had accepted his view the treaty was “a stepping stone” to full independence of the entire island and they were dissatisfied with the Free State’s unwillingness to press the issue.

This, along with the fact they believed the Free State general staff were retaining ex-British army members of the Free State at the expense of former IRA men when it came to demobilisation was also a factor behind the mutiny, he explained.

“The army council of the IRA sanctioned the attack in Cobh. I’m not saying with 100 per cent certainty that the IRA did it because there is some evidence of Free State involvement as well, but certainly the IRA hoped that the British would come back in and retaliate and lead to a resumption of hostilities.”

Death on the Pier: The Cobh Pier Head Shooting and the Story of the Moon Car is self published.