Woman in her 20s was rescued at Whiterock in Killiney, south Dublin on Tuesday 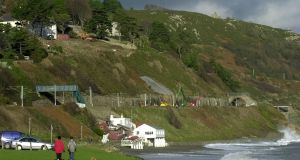 Dún Laoghaire Coast Guard received an emergency call on Tuesday from the father of a young woman in her twenties who became trapped on a cliff face at Whiterock in Killiney. Photograph: Matt Kavanagh

A woman was rescued by a Coast Guard helicopter on Tuesday after she got stuck on the side of a cliff in Killiney, south Dublin while trying to retrieve a drone.

Dún Laoghaire Coast Guard received an emergency call on Tuesday from the father of a woman in her 20s who became trapped on a cliff face at Whiterock in Killiney.

The woman had climbed the cliff to try and recover the drone that her father had been flying. The pair had taken the drone to Whiterock Beach for testing before the device crash landed.

The woman scrambled up the cliff to a height of 9 metres (30 feet) before getting stuck at a point “where she could not go any further, neither up or down,” according to Dún Laoghaire Coast Guard.

Members of Dún Laoghaire Coast Guard were deployed to the scene along with a Rescue 116 helicopter. A request for assistance was also sent to the Greystones Coast Guard cliff climbing unit.

A member of Dún Laoghaire Coast Guard reached the woman on the cliff face and stayed with her until the rescue helicopter arrived at the scene. A winch man was then lowered down to recover the woman.

She was brought back to the beach where she was medically assessed. The woman was not injured in the incident.