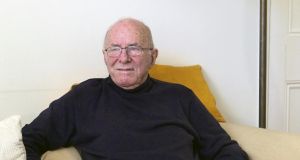 Clive James said the imminence of his death had made him reflect on his life and he had concluded that he was an “unusually unwise young man until quite recently”. File photograph: Hazel Thompson/New York Times

Writer and broadcaster Clive James has said he is still haunted by his father’s death more than 70 years after it happened.

In an interview broadcast on Today FM’s The Last Word programme, James said his life’s works “ springs from that one dreadful moment”.

Albert James was captured at the fall of Singapore in 1942 and held in a Japanese prisoner-of-war camp in Japan during the second World War.

He was released at the end of the war and Clive, just six at the time, and his mother looked forward to welcoming him back to Australia.

The Americans decided to fly Albert James and other prisoners-of-war home rather than send them by ship. However, the plane carrying them crashed in a typhoon and killed Mr James. The crash occurred on September 10th, 1945, 10 days after the war ended.

“I was there to watch my mother take the news. It still now deprives me of speech,” he told presenter Matt Cooper.

Clive James (76), one of the best known broadcasters, TV critics and poets of recent decades, was diagnosed with terminal cancer in 2010 and was not expected to live this long.

He was a heavy smoker for most of his life and blames his habit for the emphysema which he also now has.

“What is amazing is that I am still here,” he explained. “I was scheduled to conk out much earlier than this. The leukaemia is being held at bay by marvellous drugs. I don’t really know when I’m going to conk out.”

James said the imminence of his death had made him reflect on his life and he had concluded that he was an “unusually unwise young man until quite recently. Impending death straightened me up a bit. I’m a lot wiser and I have a lot more to write about.”

Since his diagnosis in 2010, he has embarked on one of the most prolific periods of his life. He has released six books and a translation of Dante’s Divine Comedy.

“If you live those few extra years, you can do a bit more looking back and there is time to think about things. I have plenty of new material to work on. I have a much more mature view of my life than I had earlier,” he told The Last Word.

His diagnosis came as a shock to him and prompted many poems of regret about the way he lived his life.

“I had to think hard about whether I should quit altogether and lie down or else get on it. I decided on the second alternative,” he said.

“Since I can’t do anything except write, I’ve ended up writing quite a lot. I think I’m writing at my best, but writers always think that. You can’t always trust them.”

James acknowledged the influence of Flann O’Brien on his work. “He was very good on writer’s egos. He spotted straight away that they were all egos.

“I do love Flann O’Brien. It is a great blessing for a country to have that sort of a literary background.”