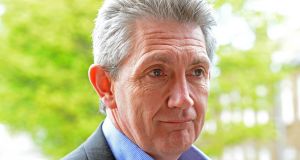 Civil Public and Services Union general secretary Eoin Ronayne said there was nothing to stop the in-coming Government from entering into talks on bringing forward elements of the existing Lansdowne Road agreement which is scheduled to run until 2018. Photograph: Eric Luke / The Irish Times

Lower-paid civil servants are to seek the Government to bring forward the payment of a €1,000 increase scheduled for September 2017 to accelerate the restoration of terms and conditions cut during the economic crash.

They have also signalled that civil servants working in An Garda Síochána will be looking for matching improvements to terms and conditions that may emerge for gardaí from a forthcoming review.

Speaking at the annual conference of the Civil Public and Services Union (CPSU) in Killarney, its general secretary Eoin Ronayne said there was nothing to stop the in-coming Government from entering into talks on bringing forward elements of the existing Lansdowne Road agreement which is scheduled to run until 2018.

CPSU deputy general secretary Derek Mullen said the Government would be well advised to bring forward the payment date for the €1,000 pay increase due in September 2017 “to the start of the year”.

“Our members are not blind to pay developments elsewhere and are restless for more progress on restoration.”

Mr Mullen also said CPSU members working in An Garda Síochána would find it hard to accept the position that they were working additional hours per week introduced under the former Haddington Road agreement while gardaí working alongside them are currently not doing so.

Gardaí earlier this year unilaterally pulled out of working these additional unpaid hours.

A new review of Garda pay and conditions is due to be completed within the next few weeks.

Mr Ronayne told delegates that the CPSU would be saying very clearly that no deal agreed with gardaí on foot of the forthcoming pay review would be seen “as not having an implications for our agreements”.

“There is no special bubble for any grade or grades in An Garda Síochána.”

Mr Ronayne said other issues that could be addressed in early negotiations with the Government were the removal of reduced pay terms for new entrant clerical officers in the Civil Service, the abolition of the remaining elements of the public service pension levy and the reversal of the requirement to work additional unpaid hours each week.

“If the Haddington Road agreement and previous (public service ) agreements could be ended or negotiated away before their due date, then so too can the Lansdowne Road agreement,” he said.

The conference also heard that the union was opposing new disciplinary moves proposed for dealing with under-performing staff.

Mr Mullen criticised the secretary general of the Department of Public Expenditure and Reform Robert Watt who he suggested had indicated that it should be made easier to sack civil servants. He said the bar should be high for civil servants facing disciplinary action.

Mr Mullen also ruled out having the pay of civil servants determined by an outside board in the future as part of a new structure for determining remuneration.

“There are people in Fine Gael and on the right who would want to put some sort of independent board in place to determine our pay. We will be the people who determine our pay and terms and conditions of employment in negotiations with the employer at the negotiating table. It will not be the job of some independent group the Government appoints to do that.”