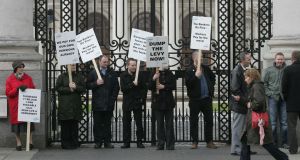 Government buildings employees and members of the CPSU protesing over the introduction of the pension levy in 2009. The union says pay restoration ‘will have to be accelerated’ against the backdrop of a growing economy. Photograph: Alan Betson/The Irish Times

Mid-ranking civil servants have joined teachers and gardaí in calling for a faster reversal of pay cuts which were put in place for public service personnel during the economic crash.

The annual conference of the Public Service Executive Union (PSEU) also saw a warning issued to the Government against introducing new systems for setting public service pay rates which would not involve negotiations with staff.

In a speech to the conference in Galway on Thursday, PSEU president Maria Ryan said that the Lansdowne Road deal on pay restoration - which came into effect in January - while welcome, represented only a first step.

“Public servants cannot fail to have noticed that we live now in the fastest growing economy in the EU.

“Our message is crystal clear. If this country’s economy continues to grow at the healthy rate that we are witnessing currently, it is not sustainable to maintain the imposition of emergency legislation and the pace at which the unfair impositions on public servants are lifted will have to be accelerated.

“Against a background of growth rates of 7-8 per cent, public servants cannot be expected to wait until 2018 for the next phase of restoration.”

Ms Ryan said it was true that that the pace of the journey towards pay restoration was “determined by factors outside of our control”.

“If the emergency is over then Fempi Should also be over. The issue now is how quickly the impositions of that legislation can be undone.

“Of course, we understand that external factors, most particularly the potential British exit from the EU, could have adverse impacts on our economic growth and that there is an element currently of ‘wait and see’ how matters develop, not least because those elected to do so have so far failed to live up to the responsibility to provide a government.

“However, public servants were dumped on when the economy and public finances were in trouble and we are entitled to expect to see the benefits of the recovery, sooner rather than later.”

The PSEU represents about 10,000 mid -level staff in the civil service.

Ms Ryan said that with the turnaround in the country’s economic fortunes there was also now a chance not just to treat public servants fairly but to undo the harm caused by under-investment in public services .

“We have the opportunity, once and for all, to decide to stop peddling the myth that it is compatible to have a society of low taxes with high quality public services and we can decide to allocate available resources to deliver the services that our citizens require.”

Ms Ryan warned that civil servants would not accept being excluded from any new mechanism put in place for determining pay when the financial emergency legislation is eventuallyremoved.

The Lansdowne Road deal provides for a review of how pay should be determined for staff across the public service in the future.

“A remarkably constant characteristic of public service pay determination in the EU is that it is carried out through collective bargaining. While we can anticipate the usual strident voices who will seek to have our members’ pay determined by some outside body, not subject to the usual rules of collective bargaining, I want to be clear to anybody who advocates this - public servants will not give up their right to have a say in their pay and working conditions through their unions and by negotiation with their employer.

“Any system that seeks to water down this right in any way will be resisted.”