Government’s hypocritical stance on climate change must come to an end, says Trócaire 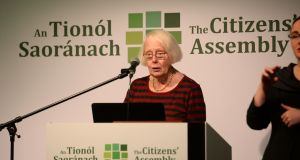 Ms Justice Mary Laffoy said she expected there would be a thought provoking and robust discussion on how the State can become a leader in tackling climate change. Photograph: Dara Mac Dónaill

The Citizens’ Assembly are meeting this weekend to make recommendations on “how the State can make Ireland a leader in tackling climate change”.

The former Danish minister for climate and energy and European commissioner for climate action Connie Hedegaardand will also outline how the Scandinavian country has become a global leader in tackling climate change.

The Danish government recently published a fully-costed strategy to divest the EU member state from all fossil fuel use by 2050 with minimal additional cost to its citizens.

Already use of green transport is widely adopted, while Copenhagen has become one one of the greenest cities in the world reflected in its bicycle strategy, which is widely embraced and is helping to reduce carbon emissions and air pollution.

The assembly has participated in “a ground-breaking process in democratic decision-making on climate change” according to the Stop Climate Chaos Coalition.

Its spokesman Jerry Mac Evilly said the major issue which emerged during the Citizens’ Assembly’s first weekend of discussions in October was “the lack of political leadership in Ireland on climate change”.

He added: “We hope the assembly will shake up Ireland’s policies on climate change by providing strong recommendations to Government.”

Head of policy in Trócaire Niamh Garvey said the assembly was considering how Ireland could become a global leader, yet Irish emissions were rising and we were likely to miss targets for 2020.

“To make matters worse, while Storm Ophelia was wreaking havoc, the Government was fighting tooth and nail in Brussels for loopholes in 2030 targets which will water down Irish and EU ambition.”

The assembly has the opportunity to make sure the Government’s hypocritical approach comes to an end, she said. “This is critical not only for Ireland but also for developing countries which are most impacted by climate change.”

Recommendations put forward by Stop Climate Chaos and the Environmental Pillar include supporting a transition to an economically and environmentally sustainable model of farming; increasing the share of investment that goes to walking, cycling and clean public transport; setting an end date for peat burning and coal-fired electricity generation; putting concrete support in place for small-scale community renewable projects and providing significant funding for deep retrofitting of Ireland’s housing stock.

Similarly in the agriculture module Prof Gary Lanigan of Teagasc will examine current policy on farming and land use, while Prof Alan Matthews of TCD will outline how Ireland would need to change if it was to adopt a leader role under these headings. Longford farmer Andrew McHugh will outline how he has adopted “smart farming” to improve efficiency and reduce carbon emissions.

Prof John Fitzgerald, chair of the Government’s climate change advisory council, will address the assembly on Sunday. It will then go into private session and vote by secret ballot on recommendations they wish to make to the Houses of the Oireachtas. An expert group has been advising them on all aspects of climate change.

The assembly members’ conclusions will form the basis of a report to be submitted to the Houses of the Oireachtas for further debate by elected representatives.

All public sessions of the Assembly will be live streamed on www.citizensassembly.ie