Politician, writer and diplomat discussed on centenary of his birth 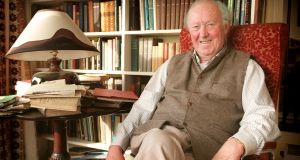 Dr Conor Cruise O’Brien: minister in the 1973-1977 coalition government, an editor-in-chief of the ‘Observer’ in the 1980s and an elected unionist politician in Northern Ireland in the 1990s. Photograph: Dara Mac Dónaill

Politician, diplomat, journalist, historian, public intellectual and contrarian: the long life and many works of Conor Cruise O’Brien were discussed in Trinity College Dublin on Friday during the second day of a symposium held to mark the centenary of his birth.

A minister in the 1973 -1977 coalition government, an editor-in-chief of the Observer newspaper in the 1980s and an elected unionist politician in Northern Ireland in the 1990s, O’Brien was also arguably the most influential voice in the revisionist movement which arose during the Troubles to challenge hitherto accepted narratives of Irish nationalism.

Following contributions on Thursday covering O’Brien’s career as a UN representative in the Congo in the 1960s, along with discussion of how his thought was influenced by disparate Irish political and cultural traditions, Friday’s proceedings began with a debate on his writings on the great 18th-century Irish political thinker (and fellow Trinity graduate) Edmund Burke, and the founding fathers of the US.

Quoting Burke’s lines that “It requires a deep courage to be temperate” and “every prudent act is founded on compromise and barter”, Prof Susan Dunn contrasted Burke’s moderation and humility with the “malignant idiocracy” of the Trump administration.

“Conor was very optimistic about the US,” she said. “But he warned the Enlightenment and democracy were unlikely to survive in the rest of the world if they go down in America.”

In a wide-ranging discussion spanning four centuries, Prof Paul Finkelman described Thomas Jefferson as a “monster” whose true attitude to slavery had been deliberately obscured by many historians.

Wearing a tie bearing the images of the generals of the Union army who he said had destroyed slavery, Prof Finkelman described Jefferson as “the creator of scientific racism in US and around the world”, a tradition which he believed led directly to such incidents as the recent racist violence in Charlottesville, Virginia.

O’Brien’s book The Long Affair: Thomas Jefferson and the French Revolution, was about French history rather than Jefferson, Prof Finkelman said, although he noted a TV interview in which O’Brien had described Jefferson as repugnant and utterly racist.

Contrary to public perception, as a government minister he had actually liberalised the censorship laws which prevented spokespeople for terrorist organisations from appearing on radio or television.

Writer and film-maker Eoghan Harris said O’Brien had been hated. “In Ireland, anyone who says anything clearly is accused of arrogance,” he said.

Defending O’Brien’s opposition to the Northern Irish peace process in the 1990s, Harris said O’Brien always took the long view, and he saw no reason that his predictions for the process would not come true. “Conor was accused of being a Cassandra,” he said. “But Cassandra was proven right.”

Historian and political analyst Margaret O’Callaghan argued that O’Brien’s 1972 book, States of Ireland, which argued that the entire political culture of the Republic was irredentist, had led to a cultural transformation of the political sphere. “O’Brien sought to reframe the debate, with considerable success,” she said.