Speaking on his return flight to the Vatican Pope Francis declined to confirm or deny claims that he knew in 2013 about sexual misconduct allegations against the former archbishop of Washington. Video: Reuters 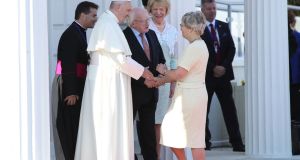 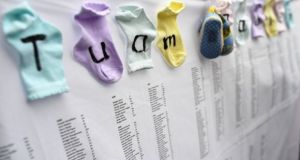 Baby socks and shoes are attached to the list of children names at the site of where the remains of 796 babies where uncovered at a site of a former mother and baby home in Tuam, Co Galway. Photograph: Dylan Martinez/Reuters.

Minister for Children Katherine Zappone has told Pope Francis that she believes the Catholic Church should “contribute substantially to the cost” of reparation involving the former mother and baby home in Tuam, Co Galway.

“I hope that the church will accept its responsibilities and make reparation for its part in a very shameful chapter of Irish history,”Ms Zappone said in a memo presented to the pope during his visit to Ireland.

“It is my strong conviction that given the role of the church in this shameful chapter . . . it must play a practical role in addressing the hurt and damage,” Ms Zappone said in her memo, which was released by her department on Monday.

“This should be done willingly, unconditionally and quickly. Nothing less will demonstrate remorse,”Ms Zappone said.

Historian Catherine Corless, who has traced death certificates for 796 infants at the Tuam home, welcomed Ms Zappone’s memo, describing it as “amazing”. She said she hoped this would encourage the Bon Secours order which ran the home “to come forward”.

“The Pope has acknowledged it and asked for forgiveness for abuses, so it is time that the Bon Secours order did,”she told The Irish Times.

The Government is due to make a decision shortly on the future of the Tuam home site, where test excavations in late 2016 on behalf the Mother and Babies Home Commission found “significant” numbers of infant bones within chambers that may have been used for a sewage system.

Five options have been identified for the Tuam site by an expert technical group reporting to Ms Zappone. These range from leaving the area undisturbed and returning it to Galway County Council to transforming it into a memorial, to exhumation of the remains there and burying them elsewhere, to further examination, full exhumation and DNA analysis .

A spokesman for Ms Zappone said it was in this context that she spoke to Pope Francis and gave him her memo.

The pope on Sunday night said he would “study” the memo.

“It touched my heart, that is why I wanted to repeat it during my speech [at Dublin Castle],” he told journalists on the plane back to Rome.

“I had never heard of these mothers, they call it the laundromat of women where an unwed woman is pregnant and goes into these hospitals, I don’t know what they call them, schools, run by the nuns and then they gave children to the people in adoption,” he continued, referring to the Magdalene laundries.

“It was for me painful [to hear] but with the awareness that I have could help clear these things up.”

Over 1,000 people, including survivors of the home, attended a vigil at the Tuam site to coincide with the pope’s Mass in Phoenix Park on Sunday.

The Minister has already said that a recommendation on the future of the burial site is expected to be announced shortly. Ms Zappone told RTÉ Radio’s Today with Miriam (italics) yesterday that she spoke to the pope in Italian, which she had practised for days, but that he responded to her in English. She said she told the pontiff the issue of the Tuam home “is important”.

She added: “He looked into my eyes and said ‘thank you for saying that’.”

She added that she was “blown away” when he later referred to their conversation during his speech in Dublin Castle.

President Michael D Higgins, who spoke with the pope in Spanish, told Ms Zappone that the Pope had been grateful for the direct way she spoke with him.