Cork teenager undergoes successful surgery for skull cancer in US 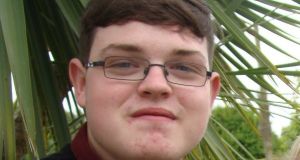 A teenage boy who was told his cancer in the skull was terminal in Ireland is looking forward to returning back home next month after surgeons successfully completed a life saving operation in the States.

Aaron McMahon (18) from Shanagarry, Co Cork underwent a successful eleven hour surgery to remove a chordoma tumour at the University of Pittsburgh Medical Centre (UPMC) last month. He hopes to fly back home next month. His prognosis is good.

Aaron was informed by doctors in Ireland that his only option was palliative care after he was diagnosed. Aaron had previously travelled to Germany for proton treatment for his condition which involves a rare form of cancer that occurs in the bones of the base of the skull and the spine.

However, surgeons in Pittsburgh said they cold treat him and he has gone from strength to strength since the surgery.

In an interview with Cork’s 96FM Aaron said his recovery was going well and he was looking forward to getting back to his own bed. He experiences “small headaches” but his pain levels have been significantly reduced.

“I just want to go home to my own bed. And the dogs Oscar and Cooper. I am speechless towards the amount of people who got involved. Everyone who came out fundraising. I am very thankful,” he said.

His mother Gail McMahon said she is concerned about coming home as she claims the country is without the medical expertise needed to assist Aaron in his recovery.

“The comfort here of going in and seeing one of the team (in Pittsburgh), it doesn’t matter which one, and you can ask questions. If I am out with Aaron and I have a problem I can email. You have no idea of that feeling that at last I have somebody who can take care of Aaron,” she said.

The McMahon family acknowledged the work of the Gavin Glynn Foundation, which was set up in memory of an 18 month old boy who died of a rare form of cancer. The foundation paid for flights and accommodation in America.

The McMahons are hugely appreciative of the over one hundred thousand euro raised on a Go Fund Me page and Aaron thanked those who who sent letters and cards since he went public with his plight earlier this year.