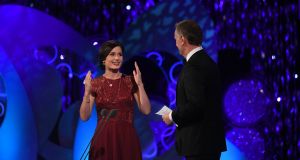 The Chicago Rose Maggie McEldowney was crowned the Rose of Tralee 2016 on Tuesday night.

The 27-year-old Chicago native works as director of development at Marist High School. Her grandmother, Brigid O’Neill, was born in Maghera, Co Derry.

Speaking on Wednesday, Ms McEldowney said she wants to change public perception that the festival is a beauty pageant.

“I would love to alter the image, just like the Roses before me have done, because it’s so much more than the glitz and the glam. Which is a wonderful part of it, it’s a beautiful aspect of the festival as well, but there’s so much more that goes into it so I look forward to creating awareness for that,” she told RTÉ’s Morning Ireland.

Ms McEldowney said she heard about the Rose of Tralee through an elderly family friend. “Rose O’Neill who is currently 100, who is living in the house that my Grandma grew up in, she thought I’d be a great advocate for Chicago, so I started researching about four or five years ago.

“I fell in love with the entire idea of the festival, everything it promotes and the mission of the festival, it’s just such a wonderful stance. I’ve been a part of the Chicago centre since and now it’s my pleasure to say I represent the international Rose of Tralee.”

When asked how Irish did she feel, she replied: “I’m definitely an American, I grew up in Chicago but I think there are a lot of Irish ways of life that were instilled in me growing up. I grew up in a very Irish neighbourhood - whether it be first, second or third generation, the wonderful thing about Chicago is the generations continue.

“My grandparents were from Ireland (Derry), my friends have parents who are Irish and now I have friends who are starting their lives in Chicago who are my age, the tradition continues. The Irish community is alive and well in Chicago.

“There are lot of things I want to accomplish, one of the things a lot of the Roses before me have tried to fix is the concept that this is some sort of beauty pageant, I would love to alter that image.”

The Rose of Tralee Festival has spent nearly six decades trying and mostly succeeding in being apolitical.

Gogglebox episode of Irish people watching this would be amazing #RoseofTralee

It avoided many elephants in many rooms over the years until Monday when two of the most incendiary issues of the day found themselves centre stage in the Dome in Tralee.

First the founder of Fathers4Justice Matt O’Connor, who was dressed as a priest, added to his long litany of successful publicity stunts by invading the stage.

He was quickly bundled away but not before he was able to get his point across about father’s rights.

He was not arrested by gardaí. Stage invasions are an inconvenience, not a crime, and he had a ticket.

In media interviews on Tuesday morning he offered a half-apology for disrupting Cavan Rose Lisa Reilly’s appearance on stage, but promised similar stunts in Ireland in the future.

It would be hard to upstage a seasoned attention seeker like Mr O’Connor but the Sydney Rose Brianna Parkins succeeded.

She claimed that her remarks about the Eighth amendment of the Constitution were off the cuff and only in response to a question about women’s issues, but this 25-year-old journalist knows how to make a few headlines of her own.

“I would love to see a referendum on the eighth coming up soon. That would be my dream,” she told a rather startled presenter Dáithí Ó Sé.

Afterwards she tweeted a photograph of herself wearing a Repeal the Eighth t-shirt giving the thumbs up.

“It seemed natural to talk about it as a women’s rights campaigner,” she said after her appearance on stage.

“It’s a big issue affecting Irish women and I hate seeing Irish women having to travel to England on one of the worst days of their lives. I think it’s really unfair.

“I was really surprised by the reaction. I thought there would be dead silence in the Dome, but there was applause. I couldn’t believe it.”

Neither could a lot of others including Graham Linehan, the co-writer of Father Ted, who lampooned the festival famously with the Lovely Girls episode.

He tweeted: “Boom, the Lovely Girls competition gets real ...the round of applause at the end was a beautiful thing too.”

What the judges make of it is anyone’s guess, but the issue of abortion was one that was included in the group discussions the Roses had before the live finalwhich were presided over by the judges.

Cork Rose Denise Collins confirmed that abortion was brought up several times in the private interviews. She told Cork 96FM: “I suppose it is a topic which is in the headlines at the moment and there are talks of a referendum and we’re all educated young women and we are articulate.

“We can form opinions on issues like that and we are completely free and open to voice those opinions.”

Not everyone wanted to hear what the Sydney Rose thought about the issue of abortion in Ireland.

Cora Sherlock of the Pro-Life campaign wondered why the Roses were asked about abortion in the first place. “After all this is the Rose of Tralee, not Prime Time.”

Tuesday’s leg was a tamer affair. Wicklow Rose Jane Harrison (26) spoke candidly of her weight battle and her loss of self-esteem when she weighed 22 stone at 22 years of age.

She lightened the mood by revealing she had a tattoo on her bum. It reads: “We are all mad here.”