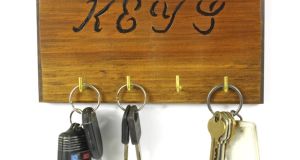 Householders have been warned not to put their car keys in a place which they can be accessed through their letter boxes.

Opportunistic thieves are using fishing rods and hooks to prise car keys from hallways and hall tables late at night.

Inspector Michael O’Connor of the Dublin Metropolitan Region garda traffic division described the practice as “rampant” and said five cars had been taken in recent days in such a way. About 20 have been stolen in recent months.

The gangs are targeting housing estates in west and north Dublin and the cars are being exported to west Africa. The gardaí investigation is part of Operation Waste which is targeting the illegal export of cars to west Africa.

Inspector O’Connor said gangs check on homes when the occupiers are out during the day. They then drive around estates at night targeting homes where the householders are asleep.

“We have known roads where four or five vehicles have been stolen in the one estate,” he said. “In one case we had two cars in the same driveway driven away.

“The main message I’m saying is that when people go into their own homes at night, they should bring their keys into a safe area within the house where those gangs or burglers do not have access.”

Among the cars which have been stolen include a Volkswagen Golf, a silver Nissan Juke and a white Fiat van.

The cars are being smuggled to west Africa by criminal gangs.

Inspector O’Connor said many of the other cars being exported to West Africa are not roadworthy and are dangerously loaded with everything from chairs to flat screen televisions and second hand engines.

Since its inception in September 2014 the operation has seen over 50 vehicles including cars and articulated trucks detained for either no insurance or no certificate of roadworthiness.

Three stolen vehicles including an Audi Q7, a Toyota Avensis and a Mercedes Benz S350 have been recovered before they could be exported.

It was established to combat the use of public roads by uninsured, untested and dangerously loaded vehicles arriving at Dublin Port, destined for export to West Africa.