‘It had gone over the stone wall barrier. I was holding my breath’, said eye witness 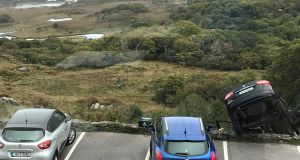 A car which had been driven by tourists was left dangling over the lakes of Killarney at lunchtime on Friday. Photograph: Raymond O’Shea

A tourist couple were left teetering in their car high over one of Ireland’s most famous viewing spots on Friday afternoon – after a freak accident when they stopped to take a peek.

However the young couple, from Taiwan, emerged from their hired car unscathed. And within minutes were laughing about an incident that might have been a disaster .

“I think I got a bigger fright,” said Raymond O’Shea, owner of the Ladies View café and craftshop who looked out from his rooftop eatery to see a black Renault Fluence car holding on by one wheel.

Never before had there been such a near miss at the small car park with the huge view.

It was lunchtime and Mr O’Shea had been on the roof terrace restaurant clearing tables when he heard a loud bang and “next thing” there was a car over the wall.

He looked down at the car precariously dangling over the side.

“It had gone over the stone wall barrier . I was holding my breath,” Mr O’Shea said.

He rushed to the scene but the young couple simply opened the front doors and walked to safety.

“After their initial fright they were laughing about it. They were really cool,” Mr O’Shea said.

He believed them to be in their 20s and it was their first time in Ireland. They had travelled to Kenmare from Kinsale and along west Cork, and were on their way to Dingle.

They will now have to spend the night in Killarney until their car hire company gives them another vehicle to proceed this time along the high coastal Inch route.

The car was removed around 4pm by a crash repair company. The front of the car is badly damaged, and there is some damage also underneath where it jumped the wall.

It is the first time anything like this has occurred, said Mr O’Shea, whose family have run the Ladies View café for a number of generations.

The viewing point around 12 miles from Killarney, was made famous after the 1861 visit of Queen Victoria. It is called after her Ladies-in-Waiting who were apparently most taken with the spot and its opportunities for quiet reflections and is one of the most photographed places on the N71 tourist route.