We don’t eat as many as we used to. But we know how to grow them in space 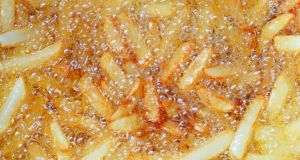 Happy Potato Day, everybody! For the day that’s in it we thought we’d dig up all the interesting things we could find about the humble spud.

1 Irish people’s dependence on the potato has fallen dramatically in recent decades. Our average annual consumption, at 85kg a person, is 2½ times higher than the world average, but in the 1990s that figure was 140kg a head. Today only 70 per cent of the carbohydrates in our diet are supplied by the potato. In times past it was in excess of 90 per cent.

2 A potato is a living thing long after it is pulled from the ground. Although lesser vegetables – we’re looking at you, carrots – die the moment they are harvested, a potato lives on like the hardy little thing it is. Left to its own devices a potato will sprout, and then, if you are so inclined, you can plant it and watch it grow a whole rake more potatoes.

3 The biggest potato ever grown weighed a touch under 5kg – a good deal more than the average cat. Guinness World Records tells us it was grown in England in 2011. It does not, sadly, tell us why it was grown or what it tasted like. We can tell you that such a potato could make more than 100 bags of Tayto.

4 We can thank the Inca tribes of Peru for the vegetable. (Strictly speaking, potatoes are not vegetables but tubers.) They started cultivating it about 10,000 years ago. The potato did not make it to Europe until the Spanish conquistadores, having tired of slaughtering Incas, brought them here in the 1570s. They weren’t eaten by humans until the 1660s, and it took another 100 years or so before they became a European staple.

5 The Incas used potatoes to treat rheumatism and toothaches and broken bones . . . everything, really. It wasn’t much use to them when it came to warding off marauding Spaniards, though.

6 And how did they end up in Ireland? According to Tomás O’Riordan, writing in History Ireland, “the president of the Royal Society, Sir Robert Southwell (1635-1702), was recorded in the minutes of a meeting of December 13th, 1693, as stating that his grandfather had ‘brought potatoes into Ireland who had them from Sir Walter Rawleigh after his return from Virginia’.” History Ireland goes on to explain that Sir Robert’s grandfather was Anthony Southwell, who “with his brother Sir Thomas came to Munster in some official capacity in the reign of James I”. It adds that the claim is “rather dubious to say the least. If Ralegh was in a position to distribute potatoes at an early date, he must surely have got these potatoes from England, since he was never in Virginia”.

7 Although Walter Raleigh (a man whose name has several spellings) had little or nothing to do with the potato as we know and love it, he did see potatoes off the coast of Venezuela – but these were sweet potatoes. Sweet potatoes are not sweet. Nor are they potatoes. They are just a sham from start to finish. And that is why they don’t have a day to call their own.*

8 So where did we get our potatoes? “Rather than looking to England and her naval heroes, we should instead look to Spain, ” says O’Riordan. “The potato was often referred to as An Spáinneach or An Spáinneach Geal” – the white, or kind-hearted, Spaniard – “in its early history. This would suggest a point of origin in Spain itself, or that a Spaniard was responsible for introducing the potato to Ireland.”

9 From the past to the future. The potato was the first vegetable to be grown in space. The process started in 1995, on the Columbia space shuttle, but it wasn’t until 10 years later that the growing technique was perfected. Space potatoes are known as Quantum Tubers. You’ll not find them in your local Dunnes. Or anywhere else, really.

10 If you store a potato correctly – in complete darkness – it will be good to eat for six months or more. If you store it in a brightly lit part of your kitchen it will be all sprouty and gross within a few weeks.

11 The crisp was invented by accident, or so the story goes. The railway kingpin Cornelius Vanderbilt used to eat at Cary Moon’s Lake House in Saratoga, New York, where a chef called George Crum worked. One day Vanderbilt sent back his potatoes and complained they had been cut too thick. Crum then sliced a new batch incredibly thinly – more to wind up Vanderbilt than anything else. He fried them and added salt. And so the crisp was born.

12 There can’t be many vegetables that have mortally wounded a political career, but the potato – or should we say potatoe? – is one of them. In 1992 Dan Quayle, who was vice-president of the United States at the time, changed a 12-year-old student’s spelling of “potato” to “potatoe” at a spelling bee in Trenton, New Jersey. The press had a field day. Apparently it wasn’t entirely his fault. The New York Times says he was using cards provided by the school that included the misspelling. In his memoirs he said he was thought there was a mistake but decided to trust the school notes rather than his own judgment.

13 The potato industry is worth €85 million to about 500 growers who plant 9,000 hectares a year. Ahead of National Potato Day the chairman of the potato committee of the Irish Farmers Association’s, Eddie Doyle, insisted that retailers “recognise and respect the massive investments potato growers have made” and called for them to be “sold as a premium product and not used in any retail practices that undermine the primary producer”.

14 National Potato Day is part of a €1 million, three-year promotional campaign organised by Bord Bia to signal the health benefits of the potato. The theme for this year’s celebration, Potatoes: What’s Under the Skin, will emphasise the health benefits of Ireland’s most popular vegetable. (Yes, strictly speaking, it’s a tuber.) And what are those benefits? Potatoes are low in sugar, naturally free of salt and fat, and a source of fibre and potassium. A medium-sized baked or boiled potato with its skin on has just 110 calories and provides nearly half your daily vitamin C – and more potassium than a banana. It is also a great source of vitamin B6, fibre, magnesium and antioxidants.

15 At the start of 2016 Andrew Taylor from Australia decided he would eat nothing but potatoes for a year. He lost more than 50kg and said he turned his life around. “You literally get everything you need from potatoes.”

16 There are bajillions of varieties of potato. Literally, bajillions. But don’t be confused any more. The potato.ie website tells us that Roosters have a “clean and smooth, russet-red dark red skin and shallow eyes” and a “floury yellow flesh and a deep earthy flavour, which lends itself particularly well to roasting, baking/jacket potatoes, chipping and boiling”. Kerr’s Pink is a late-maturing main-crop variety that has a pink skin and creamy white flesh with a flourier texture. It is a versatile all-rounder, best steamed, baked or chipped. Queens are early maturing and have a white to yellow skin and white flesh, with excellent flavour and a floury texture, “suitable for baking, mashing, roasting and frying”. Golden Wonder is a late-maturing main-crop variety suitable for baking, mashing, roasting and frying. Maris Piper “excels for making chips and roast potatoes, while also being good for wedges”. Records have yellow-brown skin with “an intermediate to rough skin (and ‘netted’ skin appearance) and white to yellow flesh. It has a dry and floury texture, with a good taste.”

17 When it comes to boiling potatoes, the key is to put them in a pan of cold water and then bring it to the boil, instead of putting them directly into boiling water. It takes a little longer but ensures that the inside and outside cook at the same time, to give an even texture. If you have cubed your potatoes they’ll take about 15 minutes to cook; whole, they’ll take 20-25 minutes.

* Sweet potatoes probably do have a day to call their own. Everything does