Car insurance costs will not be ‘dramatically’ reduced, Murphy says 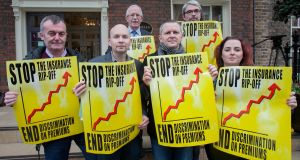 There will be no dramatic lowering of car insurance costs as part of the Government’s attempts to address spiralling premiums, Minister of State at the Department of Finance Eoghan Murphy has said.

Speaking before the Oireachtas finance committee on Thursday following the publication of his Report on the Cost of Motor Insurance last month, Mr Murphy said he had received positive engagement from the insurance industry on the topic of rising premiums since consultations on the issue began last year.

However, when asked when consumers can expect the price of premiums to drop, he indicated that the 71 recommendations contained within his report were designed to lead to a gradual lowering of costs, rather than a drastic short-term reduction.

“[Premiums] won’t become dramatically lower as in the past because that wouldn’t be prudent,” he told committee members.

Asked if he had received raw data on claims which had not been previously disclosed by insurance companies, he confirmed that industry stakeholders were now engaging fully in that process, following “robust” exchanges with Insurance Ireland, the umbrella body for the sector.

“I did have to have a number of robust conversations with Insurance Ireland . . . I have seen a change, and I feel it’s a positive change in terms of the information that’s being supplied,” Mr Murphy said.

Referring to a recommendation in the report which mentions the possibility of the insurance industry funding a dedicated anti-insurance fraud unit within An Garda Síochána, Sinn Féin finance spokesman Pearse Doherty said such a move could lead to the “privatisation” of part of the police force.

Mr Doherty said this would be a “very risky” development and a “slippery slope”.

He said any such financial contribution by insurers should be made directly to the exchequer before being redistributed from there.

Mr Murphy said he understood the reservations expressed by Mr Doherty, but said the proposal, which had been pushed “strongly” by insurers, gained traction because it had worked successfully in the UK.

However, he said that no commitment had been given to implementing it as of yet.

Mr Murphy is due to attend a Dáil debate on the cost of motor insurance on Thursday evening.

Groups including the Anti-Austerity Alliance-People Before Profit have organised a protest outside Leinster House to coincide with the debate.

The demonstration will also feature representatives from student and taxi drivers’ groups, who have campaigned against rising insurance costs.

Addressing a media briefing ahead of the protest, Dave McGuinness, of Tiománaí Tacsaí na hÉireann, said some taxi drivers had complained to him of increases of between 300 per cent and 500 per cent in their premiums.

The rising costs have led to drivers opting to sign on for social welfare payments rather than continue operating a taxi, he said.

Union of Students in Ireland (USI) president Annie Hoey said she knew of one student who was quoted a price of €6,000 to insure their Volkswagen Polo, and that she herself had recently been quoted a price of €3,000 to renew her own policy.

Anti-Austerity Alliance leader Paul Murphy described the Government’s actions on the issue as “patently inadequate” and called for the nationalisation of the insurance industry, so that motor cover could be provided “as an essential public utility”.