Can children really be taught to think like entrepreneurs? 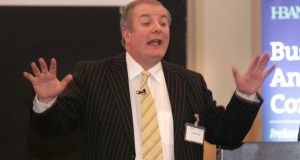 Gavin Duffy of ‘Dragons’ Den’ said he is “always surprised by the level of understanding of business primary school children in particular can display”. Photograph: Dara Mac Dónaill

This week Ibec called for teachers to be trained in “entrepreneurial thinking” with a view to introducing courses at primary and secondary schools in how to be a top businessperson.

On one level, the notion seems ridiculous. Could Steve Jobs, Bill Gates or Mark Zuckerberg really have picked up the vision required for their game-changing enterprises in high school? Could Michael O’Leary have been schooled in transforming a two-bit airline into an aviation superpower in between learning his Confirmation catechism?

Of course not. The world’s great entrepreneurs are born not made. But that is not to say Ibec’s policy document on entrepreneurship is without merit.

“I do think it is something that can be taught,” says entrepreneur and master of the Dragon’s Den Gavin Duffy.

He gives talks in schools and says he is “always surprised by the level of understanding of business primary school children in particular can display . . . They will cost the price of baking cakes and then work out how much they need to sell them for and what they need to do to market them.”

Speaking at a recent policy seminar in Dublin, Finnish educationalist Pasi Sahlberg told Department of Education officials that its policy was to “still educate children with the mindset that there is a job for you; another option is to think ‘create a job for yourself’.”

Duffy’s perspective is echoed by Steve Blank from the Haas School of Business at the University of California, Berkeley. He worked in the real world, building companies for 21 years before moving into academia.

Speaking to the Financial Times in June, he recalled how people who knew him from his start-days said teaching entrepreneurship was impossible. “They said that someone such as Jobs were born an entrepreneur, so you cannot teach this stuff; it is hard-wired.”

He consistently challenged this notion, but with a caveat. He’s convinced entrepreneurship can be taught – but only to certain people. “I realised . . . we have been asking the wrong question,” he said. “It is not whether we teach entrepreneurship – of course you can do that. It is who you can teach it to.”