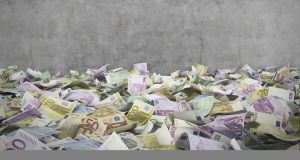 The C&AG’s report each year highlights questions about key areas of the €55 billion the government spends each year and the revenue raised to pay for it. Photograph: Thinkstock

Publishing the Comptroller & Auditor General (C&AG)’s report on State spending on the same day as the Government’s capital investment plan left the media with the dilemma of whether to headline stories of new spending or waste in money already spent.

The connection is the obvious one – the vital nature of value for money, planning and control in spending State cash, including the €27 billion in the new plan.

The C&AG’s report each year highlights questions about key areas of the €55 billion the government spends each year and the revenue raised to pay for it. It always has its peculiar contrast between big numbers and smaller ones. Its examination of 2014 ranges from the billions in the bank bailout to a review of the €32 million spent on providing the school meals programme.

It is not a report which questions the big policy decisions made by government. But it does look at how these choices are executed and asks could we have done better? Or, in some cases, why on Earth was it done that way at all?

Predictably it is in examining the bank bailout that the biggest numbers emerge. The report forensically examines the figures, saying that the net cost of the bailout to the State is now about €43 billion with €60 billion in cost offset by the remaining value of the bank stakes.

A sobering statistic is that the interest cost alone of the State’s banking bailout debt over the past six years, €9 billion between 2009 and 2014, represents one third of the total cost of all State investment planned over the next six years in the new programme.

There may be no immediate policy implication in this, the money has gone, but it is an valuable independent review of what it all cost.

Elsewhere the report deals in numbers with less noughts at the end of them, albeit that the “watchdog” role of the C&AG is clearly evident. For example in health spending it points out that that the Exchequer is owed €290 million by private health insurers relating to the cost of treating private patients and has a range of other recommendations in this area.

Among the other gems is a blunt statement that the much vaunted gains from the introduction of the new Eircode system may not emerge. The Revenue Commissioners was due to get more information from it, which it says it now has anyway. The analysis dryly points out that it is important to cost a project properly, to inform the Government fully before it decides, and to do a proper cost-benefit analysis. All pretty basic stuff, you would have thought.

The report also returns to some familiar themes; the ground war necessary for government departments and the Revenue Commissioners to make sure people only get the payments to which they are entitled and pay the tax this is due. This year the focus in terms of entitlements is on schemes which require recipients to qualify on medical grounds. Almost €12 out of every €100 paid out in the schemes under examination was to people who did not qualify, a survey found, though some qualified on other grounds.

In terms of tax, the amount outstanding and how Revenue is dealing with it is a hardy annual of C&AG reports. Last year €2 billion was outstanding, but despite some recommendations on acting earlier where possible to collect arrears there does not seem to be an easily-collectable pot of gold here for the Exchequer.

There are no overall recommendations from the C&AG. Instead the report makes recommendations where it sees fit in the different areas of spending and revenue collection. Most of them are statements of the obvious, springing from the detailed analysis. But it is clear that, nonetheless, that they needed to be said.